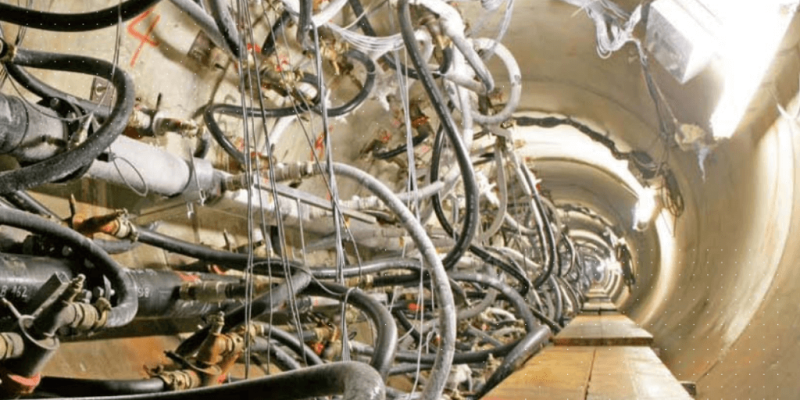 Artificial ground freezing has been successfully applied on ground engineering and tunneling projects in recent decades but is still not a commonly used method.

Ground freezing is a ground improvement technique that can provide temporary support and groundwater control to enable the safe excavation and construction of underground structures.

With a growing demand for better urban public transport and infrastructure, the need to work in difficult ground conditions under complex existing structures has also increased. Ground freezing can be applied in these conditions, especially when more common methods, including dewatering, shoring and grouting, are unfeasible.

Ground freezing is not a new technology. It has been used to support shaft sinking in mining for more than 100 years. It was patented by German mining engineer Hermann Poetsch in 1883 as a method for sinking shafts in floating rock mass. It had, however, already been used in 1862 for mine shaft construction in South Wales. The Yorkshire-based Shaft Freezing Company was also founded in the early 1900s.

The method was initially only applied to shaft sinking operations. And while “shaft freezing” continues to be used globally, the technology has also been adopted by the wider ground engineering and tunneling sector.

Famous tunneling projects that have used artificial freezing include the Big Dig road tunnel in Boston, United States in 1991 and the Donau Canal crossing for a new metro line in Austria, Vienna in 2004.

It has also been increasingly applied to complex tunnel and ground engineering projects in water-saturated, loose ground to provide structural support and seal against groundwater ingress.

The main applications in ground engineering include:

The method works by temporarily stabilizing and hydraulically sealing the ground.

“We’re using a refrigerant which absorbs the heat from the ground. The pore water freezes to ice, creating cylindrical frost bodies around the freezing pipes – usually steel pipes installed in the ground in which the liquid is circulating – that grow together,” Perl said.

The frost/freezing bodies, or frozen zones, around the pipes thus combine into one solid wall of soil and ice that is watertight.

Generally, there are two procedures and refrigerant types used for the technique – brine and nitrogen freezing.

In brine freezing, there is a cooling agent within a closed circuit that is pumped into the freeze pipe and then returned to a freezing plant. Usually the temperature of the brine, mainly calcium chloride, is between -30°C to -38°C.

Perl continued: “This technology can be used if there is groundwater flow of less than 1m/day, because if we have higher groundwater flow, then there’s a constant heat transport and the gap between the freezing pipes cannot be closed.”

In nitrogen freezing, cryogenic liquid nitrogen is used as the cooling agent.

Perl added: “When using nitrogen as the refrigerant, it is transported to the construction site in a truck and then stored in storage tanks. It’s pumped through the freezing pipes, through which it comes in contact with the warm ground, and it evaporates at a boiling point of -196°C. So that means that we have a very fast freezing process, and we can deal with a groundwater flow of up to 7m/day. But we need to take safety issues into account if we are in confined spaces such as shafts or tunnels. It is also more expensive than brine freezing, because the production of the liquefied nitrogen is very energy intensive.”

A key advantage of ground freezing is that nearly all water saturated soils can be frozen. However, groundwater flow must be considered and the salinity of the ground can also have a negative influence on the freezing point and the strength of the frozen zone, Perl noted.

While using the method, temperatures can be accurately measured with sensors in the ground, which also helps with determining the dimensions of the frost zone.

Another advantage is that the frozen ground is absolutely watertight.

Perl explained: “In terms of stability, the ground characteristics like strength and creep rate are related to the temperature distribution. The latent heat of the frozen water also provides a temporary stability reserve. That means if there is a malfunction in the freezing system, we will not have a collapse of the frost body right away. We usually have an hour or even days to fix the system. Altogether, the method provides us with a reliable and safe working method under complicated ground conditions.”

Before applying ground freezing to a project, a thorough ground investigation and design program is required. The interaction with other project elements, in particular dewatering work, must also be carefully studied.

The ground investigation needs to look at:

Laboratory tests with undisturbed samples are usually required to determine the mechanical properties, such as shear parameters, compressive strength and creep behavior.

“The concept design depends on the geometric boundary conditions and we have to develop a freezing pipe layout. The structural design will determine the required size and temperature of the frost body and investigate the time-dependent development of the frost body under load,” Perl said.

A thermal calculation will in turn give information on how long the freezing will take, the energy demand to choose the right capacity of freezing units, and target temperatures.

Once on site, the choice of drilling technology is crucial to make sure the holes are drilled with precision. Drilling is often done against high water pressures to deep depths or for long, directional horizontal boreholes. After the drilling is completed, the boreholes are surveyed with inclinometers and gyro tools to verify their inclination and direction.

Ground freezing is also known to be a more expensive method compared to more traditional techniques.

Perl also asserted: “Conditions that lend themselves to ground freezing over other grouted solutions include being “deep under the groundwater table so that, for example, jet grouting would be risky. In many cases it’s the only way to go ahead. We’ve also used it instead of jet grouting for other types of injections because the level of safety is higher. It’s more expensive but offers a higher level of safety.”