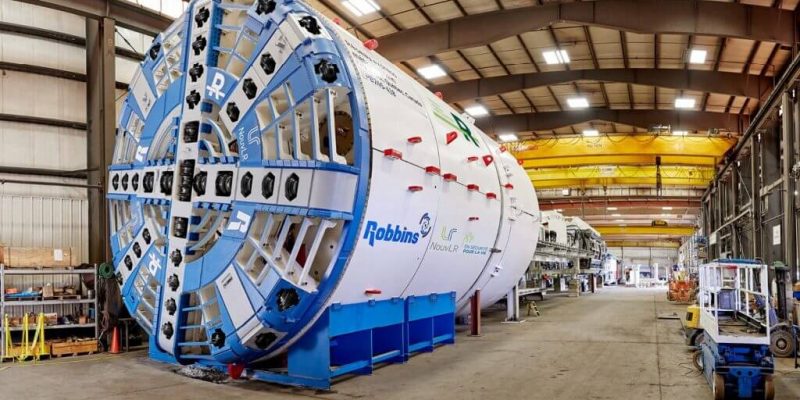 The new trouble of engineers in Montréal, Québec, they are tackling with ground settlement caused by works to create the underground section of a new light rail network.

According to the project promoter, the compressed air consumed to help a tunnel boring machine (TBM) advancement in the construction of the Réseau Express Métropolitain (REM) had caused air pockets to form in loose soil near wetlands in the Canadian city.

A project body in a statement late last month stated: “This cavity will be filled by hand in the next few days, under the supervision of experts on the field, without the use of machinery and with natural material to minimize impacts.”

The Robbins TBM with 7.4m diameter, which was named after Alice Evelyn Wilson, the Geological Survey of Canada’s first employee woman, started up last year. Usage of this TBM was for excavating a 3.5km tunnel to protect the wetlands at Technoparc and pass under runways at Montreal-Pierre Elliott Trudeau International airport.

The TBM Alice is now 300m into her drive and about 15m deep as she heads towards the airport. A maintenance operation was recently carried out on the TBM’s cutting head, during which project teams froze surrounding soil with liquid nitrogen to protect wetlands.

Meanwhile the promoter asserted: “It was satisfied that dropping water levels in the Étang aux Hérons – or Heron’s Pond – in the city’s wetlands could be attributed to the driest first half of a year for a decade.”

“Although the causes of water level variations are natural, they can be corrected in a way that will benefit the species that live in the marsh. Given the presence of our crews in the area … and our commitment and sensitivity to the preservation of wetland flora and fauna … crews will recharge the wetland to remedy the situation,” added the organization in a statement.

In accordance with the statement, the water is due to be provided from the city’s mains and added gradually over a period of days.

The intended project, which has a C$6.9bn (£4bn) REM budget and is financed and managed by the public investment fund Caisse de dépôt et placement du Québec, will comprise of 26 stations and span the greater Montréal area with 67 km of tracks. Also, engineering and construction processes are the duty of international consortium NouvLR, comprising SNC-Lavalin, Dragados Canada, Groupe Aecon Québec, Pomerleau and EBC.

While the estimated date for commencing the first train running is in 2022 from the South Shore to Bonaventure-Central Station, the other branches of the network are scheduled to be gradually put into service in 2023-2024.