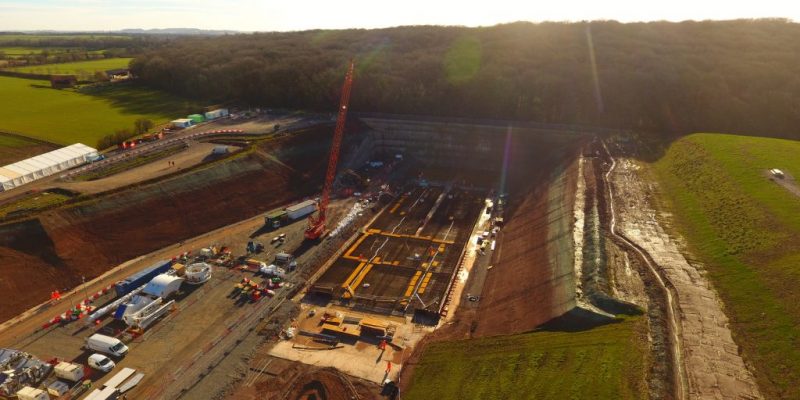 The excavation of the north portal site of Long Itchington Wood Tunnel has been finished, ahead of the launch of the TBM (tunnel boring machine) that is going to excavate under the ancient woodland in Warwickshire for the HS2 (High Speed 2) project.

Collins Earthworks, Midlands-based construction company has done the work for HS2’s major works contractor Balfour Beatty Group and Vinci Construction (BBV joint venture), which is in charge for constructing the northern section of HS2 as it moves to Birmingham.

120 people from Collins Earthworks have worked on the HS2 site since April 2020, and have bored 300,000m³ of soil, with the subsoils and topsoil stored and separated with a layer of straw, in order to put them back in the same way after finishing the tunnel construction.

Currently, the 2,000t TBM which has not been named yet, is arriving at the site in pieces from Herrenknecht, and is going to be reassembled ready to begin its drive in the summer. Digging the first bore of the tunnel will take five months, and then it will be extracted at the south portal before being transported by road back to the north portal to start the second excavation.

In March, Warwickshire people will be invited to suggest names for the TBM that will then be nominated for a national vote during the summer.

He added: “The tunnel in this location preserves the ancient woodland, so forms a key element in how we are managing environmental impacts through the design of the railway.”

“Working on HS2 has provided our business with ongoing work through the pandemic, ensuring we can continue to support jobs for our 370 employees in the Midlands,” said David Collins, Collins Earthworks CEO.

He also asserted: “We are delivering a start-to-finish service, encompassing site clearance, then providing the right machines and fully trained labour to carry out all project management and execution on site, as well as recycling materials for future use on the project.”