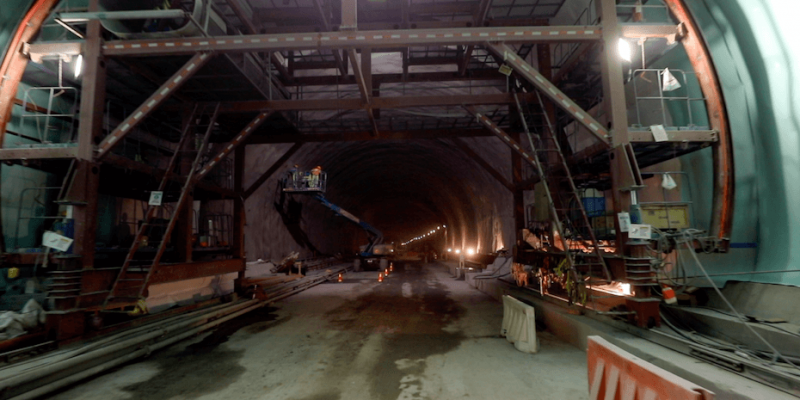 The 1.8km length and the latest tunnel completed via the complex topography of Dubai’s Al Hajar Mountains is going to be the longest rail tunnel in the Persian Gulf and forms a milestone in Etihad Rail’s development of the UAE network.

The tunnel constitutes part of Package 2D of the Persian Gulf Railway project which includes 145km of the rail line from Dubai to Sharjah through the Al Hajar Mountains toward Fujairah. It comprises the excavation of nine mountain tunnels with a length of 6.9km totally plus 54 bridges and 20 underpasses.

Tunnel boring was done by drill and blast and needed the mining and removal of over half a million tons of rock. The geology was homogenous with little water there and included majorly Late Cretaceous Harzburgite – a form of gabbro that is part of the Oman-UAE ophiolite and is generally a good rock for tunneling. Currently, a poured concrete secondary lining is being applied.

Etihad Rail has guaranteed that the project can carry on successfully according to the plan. Once the tunnel excavation is done, the tunnel is going to play a great role in the rail connectivity among the port of Fujairah and the emirates of Dubai and Sharjah. It is going to connect quarries creating construction material in the northern emirates with export points in Abu Dhabi, Dubai, and Fujairah.

When Package 2 is completed, it will extend from Ghuweifat, on the border with Saudi Arabia to the emirate of Fujairah, on the east coast of the UAE.