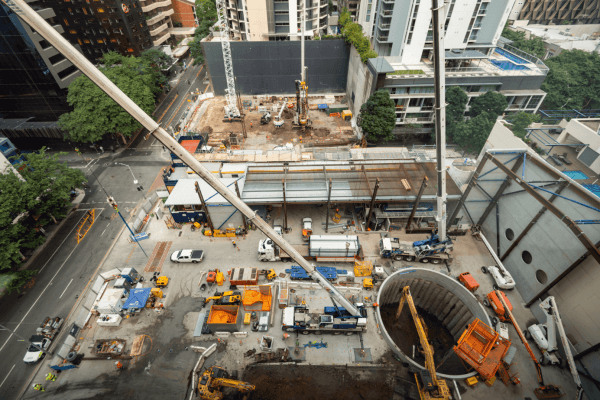 The Albert Street station in Brisbane’s CBD, has been abandoned by two Cross River Rail TBMs, which were both arrived there among June and July.

While early in August TBM Else had driven 2435 m and TBM Merle had excavated 1980 m, TBM Else is estimated to arrive at the new underground cavern at Roma Street within the next few days and TBM Merle almost four weeks later. The digging and installing process of the required equipment, that allows safe movement of each TBMs through the underground cavern, is undergoing by construction team

to prepare the location for arrival of the TBMs. Moreover, excavation continues above ground at both the service and station building shafts. Further detailed information is accessible here.

At the beginning of August, the work process for the new underground station (Lot 1) is going to advance through excavation and retention, then move into drill reset in mid-August to prepare for the coming round of blasting. While the acoustic spoil shed (Lot 2) will be the location of continuing the tunnelling and support activities, digging and retention are ongoing in the northern station entrance site (Lot 3).

The underground controlled blasts are due to implement for two cross passages underneath the City Botanic Gardens in August. Linking the two parallel Cross River Rail tunnels, that are placed every 240 meters along the tunnel alignment, will be done by a cross passage, which is a short tunnel. Click here for further information.

Construction of the Northern Tunnel Portal structure within the Normanby rail corridor, which includes Piling, excavation and concrete work, will pursue in August. Also preparation of the teams for TBMs arrival in late 2021 is undergoing. Click here to access further more detailed information.

Following the completion of a tunnel cavern excavation for the new underground platforms, Boggo Road worksite will attain a landmark moment in early August. Building of the new station will also pursue with main concrete and structural work underway. For more detailed information please click here.