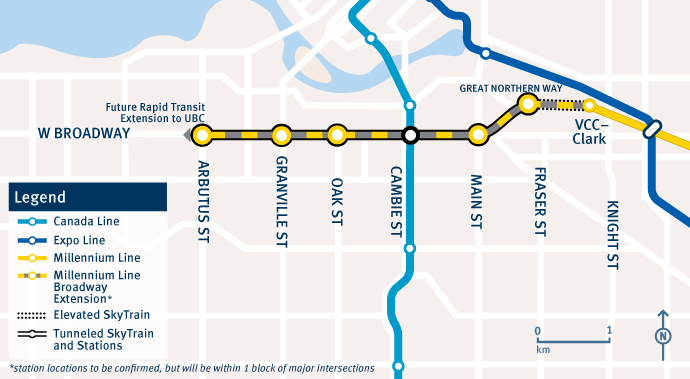 As preferred proponent for the Broadway Subway Project, the ACCIONA–Ghella consortium led by ACCIONA has been selected by the Province of British Colombia. The project is a development of the Millennium Line and a key link in Metro Vancouver’s transportation system.

The contract which worth CAD $2.8 billion, includes the design and building of 7 new kilometers of network, part of which will be underground, containing twin tunnels with an excavation diameter of 6 m (5.2 m ID) plus six new stations. 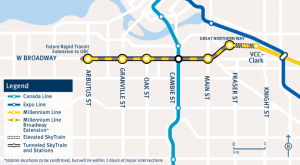 Construction of the subway will entail works starting in 2020, with the new extension which will be opening in 2025. This is going to be the fifth extension of the metro system that was constructed in 1986. When completed, the journey on the Millennium Line will take 11 minutes, saving passengers an average of 30 minutes a day while reducing traffic congestion in the city.

Carlos Planelles, Country Director and President for ACCIONA North America claimed: “This new contract will mark ACCIONA’s 6th active infrastructure project in BC. We are proud to share the trust of the Province of BC and are looking forward to another strong collaboration with Ghella. Our team is looking forward to develop further connections with our local partners and communities as ACCIONA will be celebrating its 20 anniversary in Canada in 2021.”

The consortium selected by the Province of BC contains ACCIONA (60%) and the Italian firm Ghella (40%), which has an important experience in underground works. Both worldwide companies have formerly collaborated to build iconic international transport infrastructure such as Scandinavia’s longest railway tunnels for the Norwegian railway authorities (the Follo Line); the Legacy Way tunnels in Brisbane (Australia); or the Bologna Node on the Milan-Naples high-speed rail section in Italy.

In addition to railway tunnels, ACCIONA also has extensive experience on its own of constructing metro lines in Spain, Ecuador and Brazil.