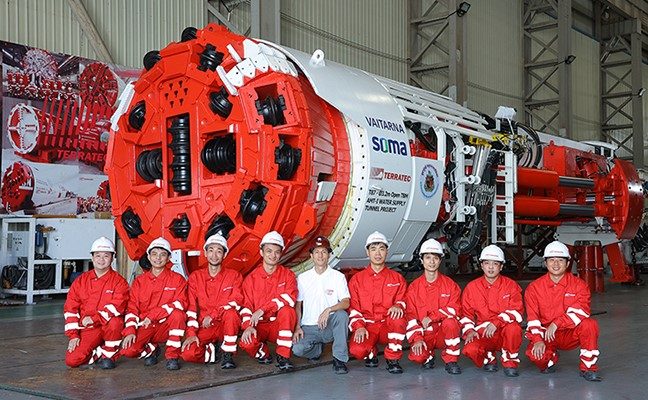 Now, after the successful factory acceptance testing, the TBM is ready to be delivered to the site where Soma Enterprise, the project’s main contractor, is going to start excavating a water transfer tunnel.

The Open tunnel boring machine is 3.2m in diameter, and it was constrcuted with a modular design that enables it to be launched and quiescent received through shafts.

18 heavy-duty back-loading disc cutters are equipped in the TBM’s cutterhead and has been designed with a flange that enables it to be detached in two pieces. Also, VFD controlled electric motors allow the cutterhead to rotate at more than 10rpm with optimum torque.

The TBM has been designed with a fixed probe drilling unit, shotcrete pump, two rock bolting drills and a steel arch erector to enable safe tunnelling throughout all the sections of the alignment.

Amar Mahal I Tunnel is one of the projects which is presently being done by the Municipal Corporation of Greater Mumbai to improve and augment its water distribution system to ensure reliable supply and solve increased demand.

Terratec has become one of the key TBM suppliers in the Indian market over the last few years, delivering tunnel boring machines for Phase III of the Delhi Metro plus for the Mumbai Metro, Lucknow Metro, Pune Metro and Ahmadabad Metro projects.

A TBM was delivered to contractor Patel Engineering for the Amar Mahal II Tunnel Project in September 2020.