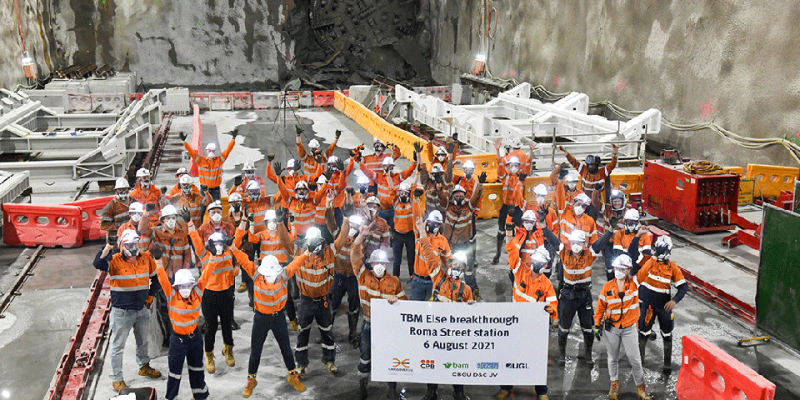 First Herrenknecht TBM breaks through into an underground cavern under Roma Street to finish a section of the tunnel running beneath the Brisbane River and the CBD in the Cross River Rail project.

In February 2021 TBM Else has been started up at the Wooloongabba site and it has worked 24/7, excavating a total of 2,580m through hard rock at an average speed of 20-30m per day, extracting almost 105,000m3 of spoil in the process. The estimated arrival time of the second TBM ‘Merle’ at Roma Street, is in the coming weeks.

Both of these TBMs have 7.2m diameter and they are due to bore 3.8km of the total 5.9km of twin tunnels that will stretch from Wooloongabba to the project’s northern portal at Normanby where Else is expected to breakthrough at the end of 2021, while TBM Merle is expected to follow shortly after. Two roadheades, which have already excavated almost 650m each, is going to dig the other expansions of the tunnel (from Wooloongabba to Boggo Road) and station caverns.

Refurbishing and retrofitting of both of these TBMs at Herrenknecht’s Northside facility with backup gantries that were repurposed from the Sydney Metro project, is a remarkable feature for them. The cutterheads are armed with 39 cutting discs exerting a pressure of 32t each, and the machines have been lining the tunnels with 270mm x 1.7m precast concrete segments. The location of the deepest point of these tunnels will be 58m below the surface at Kangaroo Point and 42m beneath the Brisbane River.

The Boggo Road, Albert Street, Roma Street, and Woolloongabba, are due to be the location of four new underground stations for the 10.2km-long Cross River Rail line. For providing the security requirements of the 2032 Olympic and Paralympic Games in Brisbane, this issue seems like a key factor.