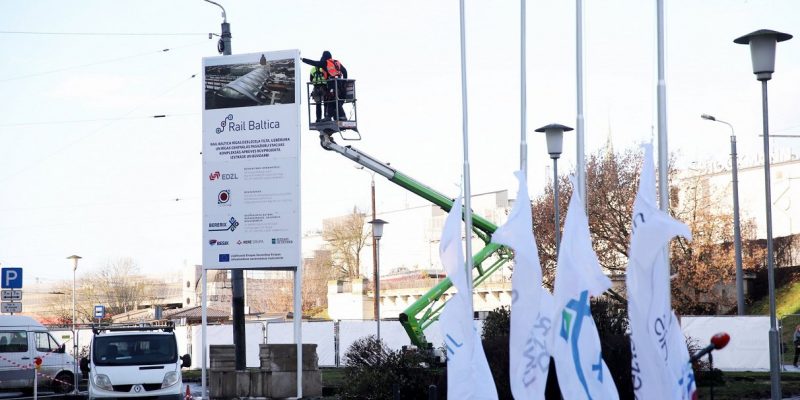 The construction of Rail Baltica Central Hub in Riga, Latvia’s capital city, has started as planned.

The construction site, which is placed between the Ministry of Transport building and the Riga Central Railway Station, was officially opened by representatives from Egis-Deutche Bahn, European Railway Lines and RB Rail (the project’s coordinator).

“With the beginning of works in Rīga Central Railway Station, we mark the beginning of construction works of Rail Baltica in Latvia. As of today, Rail Baltica construction works are taking place in all three Baltic States. As a result of the reconstruction of Riga Central Station and surrounding infrastructure, Latvia will gain new high-speed, environmentally friendly international and local railway services. Furthermore, the travel time between the capitals of the Baltic states will be reduced by half,” stated Agnes Driksna, Chairman of the Management Board of RB Rail while speaking to the project’s local residents and workers at the commencement ceremony.

Bererix – a JV between Sia Rere Būve and Besix– which won the €430 million contract in 2019, is going to build the Central Hub. Works will comprise the construction of a major railway bridge on the Daugava River, a new central station building, and building of the European standard gauge tracks and various rail infrastructures.

Nearly 85% of the cost is being provided by the European Union’s Connecting Europe Facility, with the rest of the funds being covered by Latvia’s government.

Adina Ioana Vălean, EU Commissioner, stated: “This day is a milestone in European integration history. A modern state-of-the-art railway that will bring us closer together. Rail Baltica has always been a priority for the European Commission – it is one of our critical infrastructure projects, completing our core transport network along the Ten-T.”

She also added: “This massive project will bring in new businesses, attract start-ups, create new jobs and new opportunities, and improve citizens’ living standards. I congratulate you that despite global pandemic you found a way not to hold back on this project’s constructional phase in a safe and secure manner.”

Krišjānis Kariņš, the Latvian Prime Minister, in congratulatory remote address to the project’s implementers pointed: “This project is of strategic and geopolitical importance: it will connect our economy to the European Union’s single market, increase our international competitiveness and also the security of the region. It should be acknowledged that the Rail Baltica project is also one of the most complex in terms of its scale and technical solutions Latvia has been involved in after the regaining of its national independence.”

He also asserted that: “I would like to commend the ability of all the parties involved to come to an agreement in the name of a larger target, so that all would benefit from the opportunities provided by Rail Baltica, both for our economy and for the population.”

The Central Hub is a part of the €5 billion Rail Baltica project. As to be completed by 2026, it will link the Baltic cities of Tallinn, Helsinki, Vilnius, Warsaw and Riga, and unite them into the European rail network.