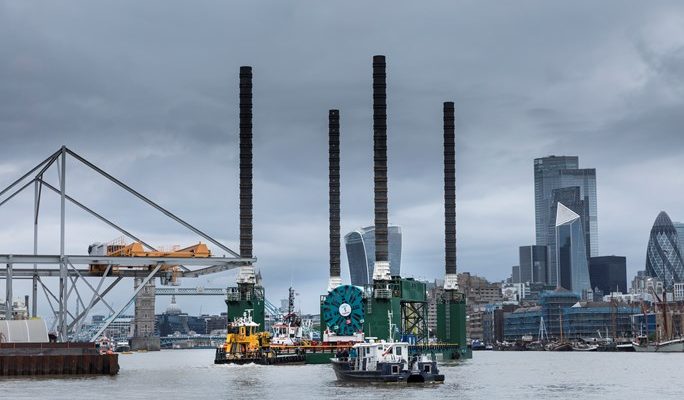 A giant TBM (tunnel boring machine) named Selina, which is set to build the final 5.5 km stretch of London’s new super sewer has arrived in the capital.
This week, Selina, was delivered to Tideway’s Chambers Wharf site in Bermondsey, where she will be lifted onto the site before starting her underground journey toward Abbey Mills Pumping Station later in the year.

Totally, a number of six TBMs are being used to build London’s super sewer (with two already finished tunneling), meaning that Selina is the final machine to start work – but she is also the deepest. 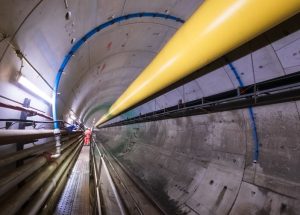 Starting her journey more than 60 meters below the ground, she will tunnel on a little decline toward the pumping station in the east of London.
The Deputy Delivery Manager for the eastern section of the project, Maurice Gallagher, said: “To welcome Selina to site is a great moment for Tideway – and for London. Although there is much work still to be done, her arrival in the capital means we’re on the final stretch – and closer than ever to a cleaner, healthier River Thames.”

By using a giant vessel called the Skylift 3000, Selina was delivered to Chambers Wharf, having travelled 800 km over the water from Herrenknecht via the port of Kehl, Germany, to the banks of the Thames in central London. 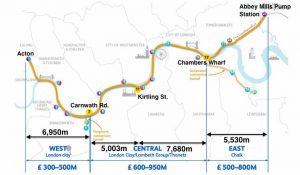 Tideway has consigned for using the river to transport construction materials where possible to decrease congestion and our impact on air quality – transporting Selina over the water, instead of road, prohibited about 100,000 km of road transport.

Via a public vote, each of Tideway’s six TBMs was named in honor of inspirational women from history connected with the local area.
Dr Selina Fox, who founded the Bermondsey Medical Mission in 1904, was the person whom Selina is named after. Bermondsey Medical Mission is a small clinic and eight-bed hospital provided medical and spiritual care to the most vulnerable women and children in the area, and continues to this day as a local charity.

Chambers Wharf in Bermondsey is an essential site for the Tideway project – the launch site of Selina, but also the site at which TBMs Annie (soon to begin her journey from Greenwich) and Ursula (currently en route from Battersea) will finish.