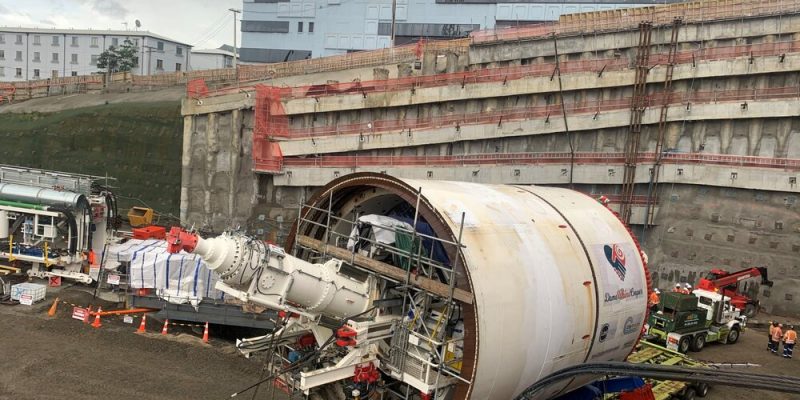 Launching the TBM Dame Whina Cooper_ Advancement over the first primary meters is careful but steady while the crew bed down getting used to the machine and conditions underground.

The maximum speed of the TBM is 32 m per a day, it will likely average at slower speeds depending on soil conditions – and will operate 24 hours a day, 7 days a week when it’s at full capacity. While there will be a crew of 12 working each shift on the TBM, another team of about 12 above ground is going to support them.

The commencing location of tunnel’s excavations was City Rail Link’s Mt Eden site and its first destination is the Karangahape Station, 830 m away. From there it bores on to the Aotea Station in central Auckland – a total journey for the TBM of 1.6 km – to join the section of CRL tunnels already built from the Britomart transport hub. 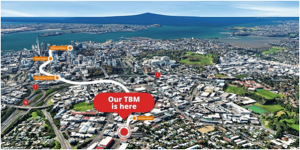 The determined ‘base-camp’ for the TBM, and the equipment and systems required to operate it, will be Mt Eden. The indicated requirements are consisting of the spoil enclosure and conveyor system, workshops, water treatment plant and a storage area for the pre-cast concrete segments that will line the interior of the tunnel.

Two roadheaders have been finished the top heading (crown) for the 223-m long southbound platform caverns. The digging process currently runs the full length of the platform tunnel, from the bottom of Mercury Lane to the Pitt Street / Beresford Square intersection.

By cutting almost 12.5 m at a time, the machines made their way through the East Coast Bays sandstone and following each cut, rock bolts and shotcrete are installed to provide safe support.

In order to stabilize the area, transferring loads from the less stable exterior to more compact, confined and much stronger interiors of the rock mass, the 3-6m long bolts are used in this project.

Providing additional strength in the bolts is done by filling them with grout (flowable cementitious fluid). Almost 7,500 bags of grout will be used upon completion of the mined tunnels.  Shotcrete, which is sprayed concrete, is then applied over the top to provide further support before the roadheader can continue to the next section. 5-10m³ of shotcrete is used per section during excavation, this is around 5-10,000 liters of shotcrete being used every 1-2.5m.

Due to the completion process of both the 223-m platforms, using over 1,000,000 liters of shotcrete is unavoidable during excavation of the tunnel caverns.

Currently, the focus is on removing the bottom bench (floor) of the tunnel, which requires fewer supports comparing with the crown of the tunnel as the crown bears much of the load. This process is expected to take around four weeks.

The construction of adit 2 and the adjoining pilot tunnel that runs below the Mercury Lane Station’s footprint, enabling excavation on the platform tunnel to the south, is another landmark achievement for this team. (Adit means a passage or tunnel that provides access to and from underground workings in a tunnel).  Due to the placement in some challenging ground conditions, additional support in the form of spiles, mesh and canopy tubes are required in this area. Finally, the pilot tunnel will be incorporated by the station, becoming part of its B7 level as the station builds down. Generally, as part of Karangahape Station, five adit tunnels will be excavated.

A related video to this project here is accessible.