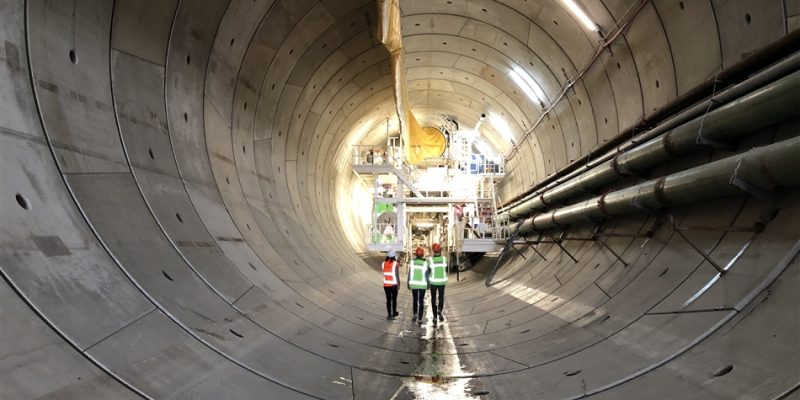 For placement of all cables, pipes and systems for the tunnels runs under the road, a cable channel/duct has also been prepared which is 2.5 m high and 2m wide. Moreover, for securing that all technical installations such as lighting, fire alarm systems and cameras are linked to each other, there are alcoves every 50 m with technical cabinets that run the systems. Other available equipment of this underground place are, fire extinguishing pipes and the waste water discharge pipes.

Determined date for transporting the tunnel technical installations (TTI) from the test hall in Eindhoven to the Corbulo Tunnel will be at the end of April.

Project manager Benjamin Mooijaart of construction consortium Comol5, who is professional in the field of tunnels, explains what is involved.  He did his HTS graduation project during the construction of the new Coen tunnel in Amsterdam, after which he continued to work there as project manager, among other things. He was also involved in the Velser Tunnel and the Maas Tunnel. While still working on the latter project, he got on the moving train of the Corbulo tunnel in mid-2019.

Testing in Eindhoven was already about to begin then.

“That’s right. When we have completed that, it will have taken 14 months. At the moment, the final tests are taking place, including the retesting of findings. This concerns systems of which not everything worked properly during the first test. One example is that certain actions on the fire alarm panel in the tunnel service buildings were not visible at the traffic control center in Rhoon. While that is precisely where the overview should always be. So this is being adjusted and tested again, with the client present, so that we can check that it works.”

By the end of February, all tests in Eindhoven will have been completed. And then?

“Then we will demobilize. The 26 modules with TTI systems are connected to each other with various cables for the testing. We are going to loosen these on one side, roll them up and attach them to the module in question. Then we will pack the modules and place them on the lorry in a watertight seal. From mid-April onwards, 16 of the 26 modules will be transported in a fortnight to the East service building near the mouth of the tunnel on the A4 motorway. The remaining ten modules will be transported to Service Building West, near the A44 motorway, in the summer.”

Those modules are pretty big. How do you get them in there?

“From above. That’s why the roof isn’t on yet. So we hoist the modules from the lorries into the service building, to the ground floor and the -1 level. This has to be done in a certain order. Fire-resistant walls are also installed between the modules. Once everything is in place after two weeks, the roof can be put on.”

The modules in the service buildings will soon control the TTI components in the tunnel, such as the matrix signs, cameras and fans. How will the connection be made?

“A cable duct runs under the road along the entire length of the tunnel. Every 50 meters there are recesses, in which technical cabinets hang. On the one hand, we connect these cabinets to the service buildings. On the other hand, the cabling runs from the cabinets to the components in the tunnel. Laying all these connections is more than a year’s work. So we’ll also be working on that for part of 2022. After that, the final tests will take place, all emergency services and road traffic controllers will receive training and the structural inspections will follow. If all this is in order, we will advise the competent authority. In this case, the Mayor and Aldermen of Leiden. If the advice is in order, they issue the permit to open the tunnel.”

What makes the Corbulo tunnel different from all those other tunnels you have worked on?

“It is a lot longer! The Maas Tunnel is over 1-kilometer-long, compared to the Corbulo Tunnel which is over 2.5 kilometers long. And testing all the TTI so long in advance; that is really new on this scale. It was the Province’s wish as client. We, the contractor combination, responded to it and are now carrying it out. So far, we are still right on schedule.”