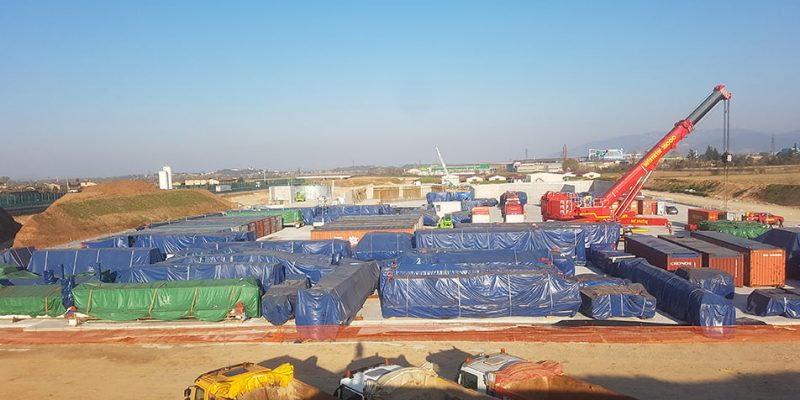 Chinese company CRGE manufactured the Earth Pressure Balance Machine (EPBM), which was procured by the joint venture, including Saipem, Pizzarotti, and ICM. The EPBM set to excavate a 48 Km link from Brescia East to Verona beneath Italy, which was accepted at the Zhengzhou factory of CREG in China in June 2019.

The Seli Overseas, the awarded contractor in late 2019, is in charge of building the 4.75km twin-tube tunnel, working through the glacial moraine.
A double screw EPBM 10.03 meter in diameter and a boulder trap able to bear up to 6 bar pressure workloads are put to use. As the machine progresses, segmental linings to 450 mm in rings of 900 mm long will be erected.

The second phase of Milan to Verona constitutes a part of the European TEN-T Mediterranean high-speed rail line. With special safety measures in place in Italy, the machine’s assembly will follow soon.

With TEN-T Mediterranean high-speed rail corridor development, Milan and Verona railways route will be marked as one of the highest vital interchanges since both play a significant role in joining Rhine-Alpine and Scandinavian-Mediterranean from north to south.

The Rhine-Alpine passage located at Milan interchange, connecting Lötschberg base tunnel and Ceneri and Gotthard tunnel through the Swiss Alps.

Work on Milan to Verona route, moving toward east Milan, comprising two tunnels 79 Km long started in the 2000s. Among which Lonato rail link is the most crucial stretch.

Part of the Mediterranean Corridor extending to Venice go through Budapest and even further. The east route bypass Lyon-Turin Mont Cenis Base Tunnel.
The Lötschberg tunnel project moves forward despite the hurdles which recently took place. And so is the construction of the parallel tunnel. Additionally, the Terzo Valico high-speed project and Brenner and Lyon-Turin Tunnel are under construction.