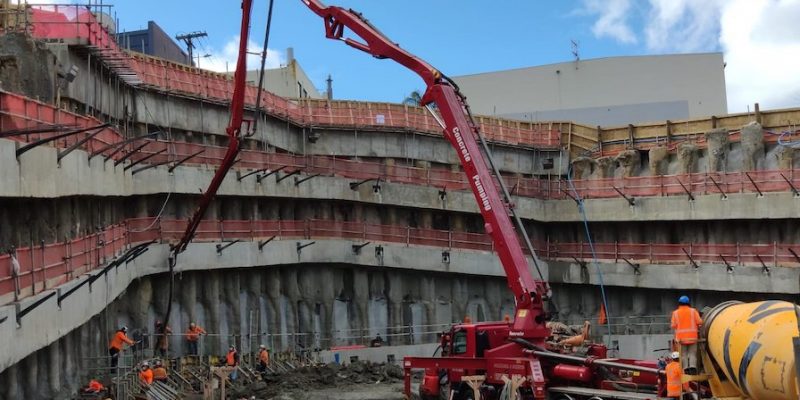 The EPB machine was constructed at Herrenknecht’s Guangzhou factory in southern China and underwent comprehensive factory testing prior to shipment. It has been arrived packaged in pieces, and will now be assembled at Auckland’s Mount Eden station where work on the tunnel portal is well advanced. From that location, the machine is going to drive 3.2km of twin parallel tunnels (2 x 1.6km) to central Auckland where it is going to link with the current cut-and-cover tunnel at Britomart Station – presently a ‘dead end’ but to become a through station when completed.

The City Rail Link line is going to be bored basically through the East Coast B4.4ays Formation of siltstones and sandstones. At an expected advance rate of 32m/day, each tunnel tube is anticipated to take nearly nine months to bore.

In August 2019, Link Alliance and the delivery partner, City Rail Link, signed a contract for the construction of a 3.45km railway which comprises three new underground stations and the tunnels. The new stations will be at Mount Eden, Karangahape Road and Aotea and the tunnels will be driven at depths of up to 42m under the city center.

The Link Alliance includes Downer NZ, Soletanche Bachy International, Vinci Construction Grands Projets, and engineers WSP Opus, Tonkin+Taylor and AECOM. Working with the owner to an outline design made by the Aurecon Group, the Alliance is responsible for delivery and design of railroad systems and the underground work.

Generally, the cost for delivering the City Rail Link project is about US$3bn and is jointly funded by Auckland Council and the NZ government. It is expected to have the project completed by 2024.

China is planning to launch its international-travel prototype train