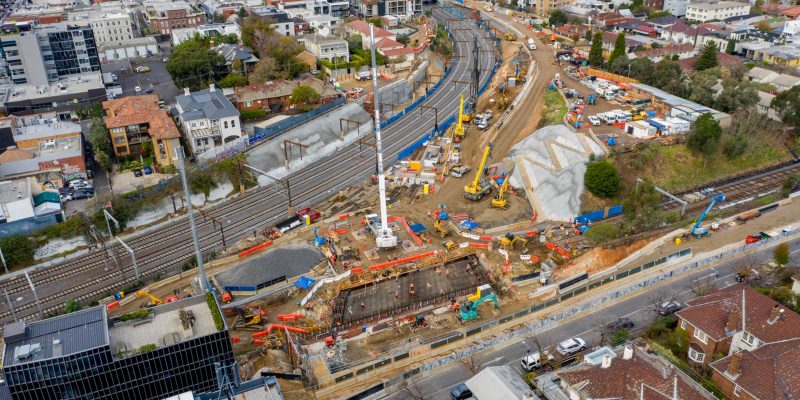 The Metro Tunnel Project in Victoria, Australia, was witness of early ending for the eastern entrance at South Yarra. The related works of new structure connecting with the project’s twin tunnels, which has been finished five months ahead of schedule, is currently continuing.

Saving around 50 minutes per a day for passengers and travelling of approximately 48 trains travelling through the tunnel every hour, are some advantages of the tunnel entrance, which has been completed in two years.

The work on the eastern entrance includes enlarging the current rail corridor, excavation of more than 31,000m³ of rock and soil, and building a base slab, internal walls and roof slab. While a new longer single-span bridge has been considered as alternative for the old William Street Bridge, the current four rail tracks for the Frankston, Dandenong, Cranbourne and Pakenham lines were moved to create space for the new tracks to enter the tunnel.

This tunnel entrance will assist movement of trains from Cranbourne and Pakenham directly to the airport as soon as the Melbourne Airport Rail be completed.

At the moment work is prospering on an underground substation at the South Yarra Siding Reserve and rail systems equipment rooms at Chambers Street. Already about three-quarters of tunneling for the project’s twin 9km tunnels, have been done by the tunnel boring machines (TBMs).

It is expected that this new metro tunnel, which will link the Sunbury Line to the Cranbourne, be able to handle movement of more than half a million commuters a week during congestion time.

There will be five new underground stations, along with the connections to City Loop services at the new CBD stations of Town Hall and State Library. The predicted date for completion of this Metro Tunnel Project is the 2025, one year ahead of schedule.

According to Paul Toole, New South Wales (NSW) Minister for Regional Transport and Roads, the 3801 steam locomotive will come back to traveler service after more than a decade.

This issue will happen after awarding a $3.5m funding by NSW government for some overhaul.