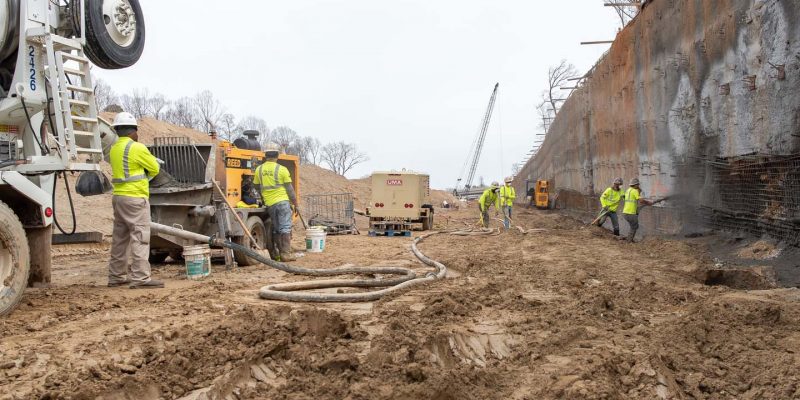 In order to completing a part of a highway widening project delivered by a joint venture led by engineering construction company Fluor, UMA Geotechnical Construction is constructing one of the largest soil nail walls by square footage in the US state of North Carolina.

UMA, which is working as a geotechnical subcontractor, has the responsibility of construction more than 10,740㎡ of soil nail wall near the city of Asheville, along Interstate 26 by April 2022.

While the work starting date of UMA on the project was September 2020, this company will finally manufacture15 soil nail walls of varying heights, which all are permanent walls consisting of epoxy-coated soil nails, bearing plates and a decorative cast-in-place concrete finish.

Interstate 26 in North Carolina is more than 86km long and runs through the western part of the state, from the Tennessee border to the South Carolina border, following the Appalachian Mountains.

The main intention of this project is to twice the traffic capacity for the route (from two lanes to four lanes in each direction) along a 12km path. This will include two interchange reconstructions – one at NC 280 (Airport Road) and the other at NC 146 (Long Shoals Road).

Other considered projects of Fluor, and its JV partner highway building specialist United Infrastructure Group, will be construction of seven new bridges – two over Glenn Bridge Road, two over Biltmore Farms Road, two over the French Broad River and one bridge on the Blue Ridge Parkway over Interstate 26. This stretch of Interstate 26 now transports more than 58,000 vehicles daily.

In August 2019 a $263M (£189M) budget has been granted to Fluor and United Infrastructure Group for the Asheville project contract as a joint venture by the North Carolina Department of Transportation (NCDOT).

“We are thrilled to be able to lead a project that is in our backyard and that will improve the daily lives of so many citizens,” said Terry Towle, Fluor’s infrastructure and power group president about the contract award back in 2019.

He also added: “This is a significant strategic milestone for Fluor. Not only does it help us to showcase the advantages of Fluor’s heavy civil business model, but it firmly establishes our position in the bid-build, self-perform market and expands Fluor’s market offering beyond the traditional design-build and public private partnerships.”

‘NCDOT I-26 Exit 40 to I-40 Interstate expansion project’ is the formal name of this plan and is due to be finished in spring 2024.