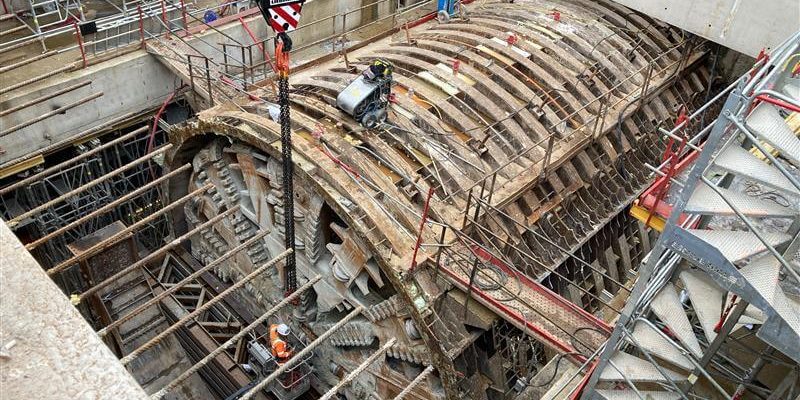 On 16th December, a new step has been taken on line 17: the Florence TBM, which began its works in December 2020 from the Flandres shaft in Bonneuil-en-France, has pierced the entrance wall of Le Bourget Airport station.

The machine arrived on December 7 at Le Bourget Aéroport station. After having excavated about 2 km of tunnel, this all-terrain machine crossed the entrance wall of one of the underground walls of the station.

However, the race of this TBM is not going to be stopped there. Now, it will be slid into the bottom of the Bourget Airport station box, in order to reach the wall opposite to that of its hole: this is the sliding operation. This maneuver will last until the end of January 2022.

Then, Florence will continue its course towards the Rolland structure at Le Bourget. It is going to have about 1.5 km of boring left to reach this structure, in the summer of 2022, where it will be disassembled to be transported to another starting point for mining on line 17: on the Triangle de Gonesse site.

Further information on Florence TBM, its route, and its characteristics is available at the page of the Le Bourget Aéroport station.