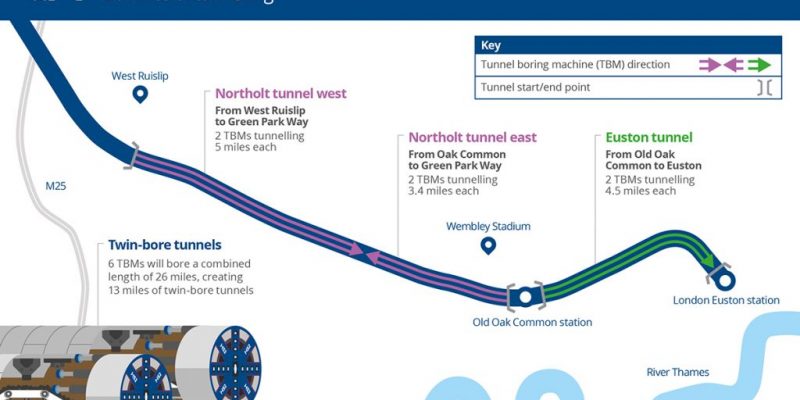 According to the announcement by HS2 Ltd, the contract for the first two tunnel boring machines (TBMs), HS2 tunnels in London has been signed by Skanska Costain Strabag JV, the chief civil works contractor. The tunnels, each 13 km in length and approximately the same length as the Crossrail tunnels will feature a twin-bore.

Herrenknecht in Germany has undertaken the project to build the 9.84m-diameter machines which cover the excavation operation through London clay and chalk geology will be transported by sea for delivery to the site by the end of 2021. The boring phase will start by mid-2022 and will continue until it is completed in the first quarter of 2024. 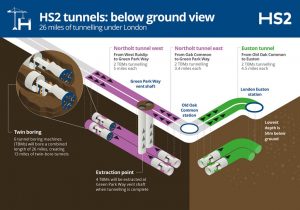 The London tunnels will emerge from just outside Euston station at Old Oak Common station and then extend to the suburbs of West London from there. The tunneling operation between central London and the M25 will be carried out by HS2 main contractor Skanska Costain Strabag JV.

From the West Ruislip gateway, both devices would be operationalized and then bore five miles east, forming the western portion of the Northolt Tunnel. The machines can be displaced from the earth and the site would then be used as a vent shaft until they reach Green Park Way in Greenford. With a 3.4-mile tunnel drive from Old Oak Common using two additional TBMs that are yet to be procured, the 8.4-mile tunnel will be completed. The remaining 4.5 miles of London tunnel between both HS2 stations will be completed by a second tunnel between Euston and Old Oak Common.

A total of ten TBMs will be needed to construct the 64 miles of the tunnel for the road between London and the West Midlands.

As Malcolm Codling, Client Director at HS2 pointed out, many homes and habitats in the capital remain undisturbed using HS2’s London tunnels. he also added that “This is a vital part of our effort to deliver Britain’s modern high-speed

rail in the most environmentally friendly manner and to reduce damage to our neighbors.

In an attempt to excavate approximately 1.2 million cubic meters of spoil, 9.84m-diameter cutter head TBMs both of which weighs around 2,000t will be used at full capacity all day long throughout 22 months except for Christmas day and bank holidays.

Virgin pushes hyperloop to next level