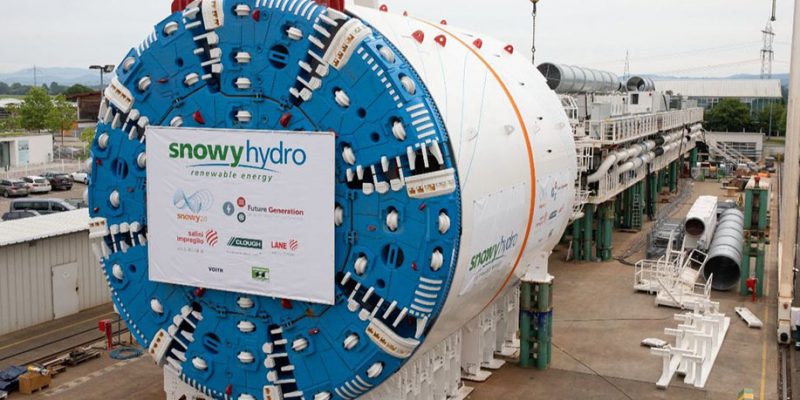 At Snowy 2 site, Australia’s largest hydropower plant, three giant TBM components begin to land, the first of three TBMs that will excavate the scheme has already been shipped to the location with a 174 t main motor.

The first shipments of the TBM parts, the front cover, gear-ring probe drill, and key seal, mounted on long trailers hauled by heavy trucks from Port Kembla, passed through the town of Cooma in the Snowy Mountains to reach Lobs Pit, where the first entry tunnel (MAT) is to be excavated.

The TBM is planned to bore at a decrease of 9 percent at 11 m in diameter to excavate the 2,660 m MAT leading to the power plant cavern site. 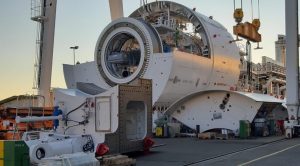 The Future Generation joint venture (JV) will conduct and develop the project. JV is to be headed by Webuild (formerly Salini Impregilo) and the project would comprise its US subsidiary Lane Construction and local partner Clough. In addition to the MAT, the JV will use two other TBMs to excavate the waterways, access tunnels, and other supporting facilities and infrastructure expected to arrive on the site in the coming months.

The JV is currently engaged with constructing workers’ camp housing plus access roads and has excavated the portal for the MAT. In Cooma, a bathing plant site and a pre-cast factory are under construction to expand 130,500 segments of concrete lining.

The Snowy 2 project entails connecting the two existing dams, Tantangara and Talbingo, through 27 km of tunnels as well as the development of a new underground power station.

The plan will take advantage of the rises and downs of generation and energy demand: water will be pumped into the upper dam when there is a surplus of renewable energy supply and energy demand is low; when power demand is high, it will be released back to the lower dam to produce energy.

Throughout the process of reusing or recycling the water in a closed loop, the system will provide portable, on-demand electricity; it will optimize the potential of renewables by using surplus solar and wind power to transfer water to the higher dam where it will be retained for later use.

Snowy 2.0 will be the potential of supplying an extra 2,000 MW of rapid-start electricity and feature a large-scale capacity of 350,000 MWh, enough to serve the equivalent of 500,000 homes at peak demand for over a week. It would also reduce market fluctuations, foster reliability, and lower family and company energy costs.

In 1955, the Snowy Mountains Hydro Electric Scheme was first commissioned, and in the meantime, several other projects were gradually introduced. Today, the scheme contains nine hydro-electric power stations as well as 16 major dams linked between Sydney and Melbourne by 145 km (90mi) of tunnels and 80 km (50 mi) of aqueducts that overall provides about a third of Australia’s green energy.