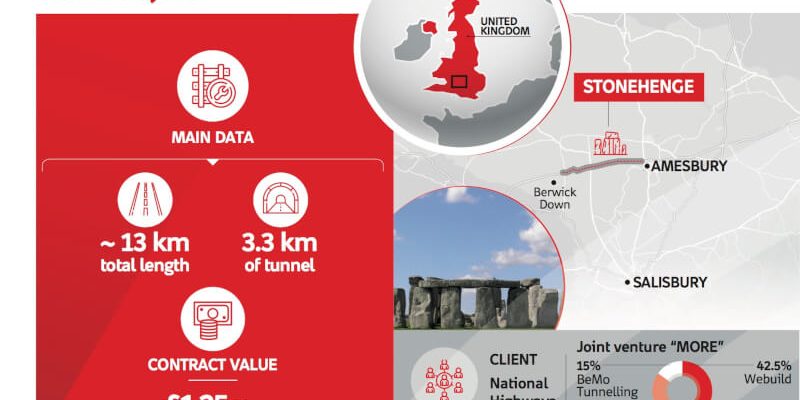 While by signing a contract delivery of the £1.25bn tunnel and main construction work at Stonehenge in the UK is up to More joint venture, the National Highways named the joint venture, comprising FCC Construcción, WeBuild and BeMo Tunnelling, as the preferred bidder in May this year.

Construction of the proposed 3.3km tunnel’s civil, structural, mechanical, electrical and technology components, including the TBM, along with the approach roadworks and structures as well as the environmental components of the five-year construction phase, are the contents of main works contract.

After violating of the decision to grant the Development Consent Order, the planning application for Amesbury to Berwick Down scheme with £1.7bn A303 value is still pending redetermination by the Secretary of State for Transport.

Additionally, awarding the £60m Delivery Assurance Partner contract to Costain and Mott MacDonald by National Highways, is due to ensuring that the program timescales are maintained. They are going to provide technical and construction management expertise by helping mobilize the main works contractor, overseeing construction, assisting the discharge of consent requirements and assuring the design.

According to National Highways project director for the Stonehenge tunnel scheme, Derek Parody: “The main works contract would become live only once the Secretary of State had concluded the planning process. The announcement in no way pre-empts any decision, and once that is finalized, and should the Development Consent Order be granted, having these contractors in place puts us in the strongest possible position to deliver this transformational scheme and deliver the benefits we know it can.”

“The scheme will not only unlock congestion along this vital A303 route, but also conserve and enhance the Outstanding Universal Value of the World Heritage Site,” added Derek Parody.

Considering as part of the total £1.7bn capital cost of the scheme, in 2020 the contracts for archaeology and enabling preliminary work was announced. An archaeological mitigation contract with £35m budget was granted to Wessex Archaeology, one of the largest contractors in the sector, while Octavius Infrastructure (formerly Osborne) was awarded the £8.5m preliminary works contract through the Collaborative Delivery Framework