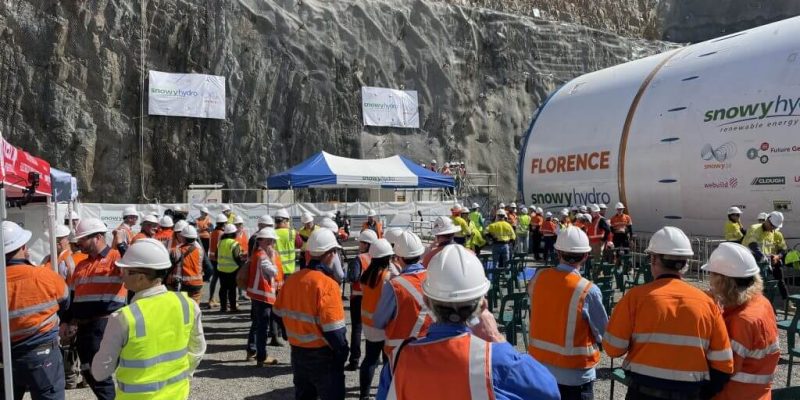 The TBM Florence with 143m in length is one of a trio of machines digging over 27km of waterway tunnels as part of Snowy 2.0, the pumped hydro expansion of the Snowy Mountains Hydro-electric Scheme, while the TBM is due to excavate the project’s headrace tunnel from the launch site at the Tantangara dam.

According to Snowy Hydro managing director and CEO Paul Broad: “The progress we’re making on Snowy 2.0 is terrific. The other two TBMs, Lady Eileen Hudson and Kirsten, are already powering ahead excavating the main access tunnel and emergency, cable, and ventilation tunnel at Lobs Hole, so we’re delighted to be starting this very long and deep headrace tunnel from Tantangara.”

The plan for the Snowy 2.0 project is to deliver 2,000MW of pumping and producing capacity and 175 hours of storage following its completion.

Launched for boring 15.4km of the 17km headrace tunnel, TBM Florence was named after Australia’s first female electrical engineer, Florence Violet McKenzie (1890-1982). While the design of this 11m diameter Herrenknecht machine is suitable for managing hazardous dust and poor ground conditions while tunneling up to 450m underground, the determined date for the first power generation from the scheme is 2025, followed by progressive commissioning of its six generating units.

Although the latest estimated budget for the project has been stated as A$5.1bn (£2.9bn), Australian energy industry figure Ted Woodley recently wrote in the Sydney Morning Herald that: “The all-up cost had increased to A$10bn-plus (£5.7bn-plus) as the underground power station and tunnels alone would cost more than $6bn (£3.4bn), without taking into account the cost of the transmission connections.”