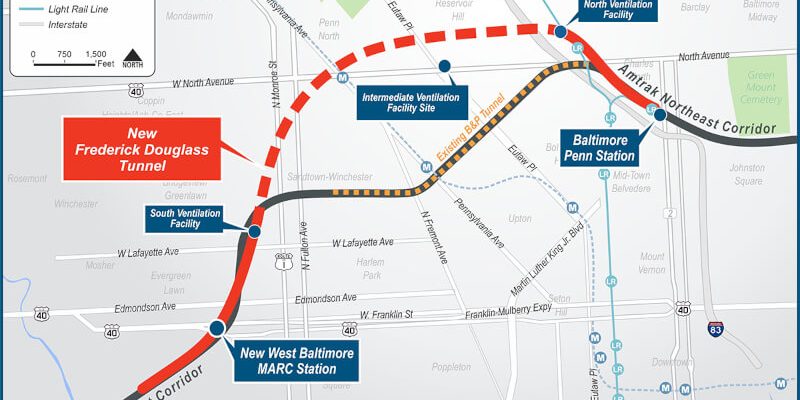 The request for Letters of Interest for the B&P Replacement Tunnel in Baltimore, has been issued by Amtrak.

Comprising of three major construction contracts for the tunnel replacement program, the US$1bn southern approach package is the first of them, while it covers primarily the open cut excavation to the south portal to the new Frederick Douglass Tunnel and construction of the new West Baltimore MARC Station. It will be completed under a Construction Manager At-Risk delivery approach.

Including the construction of two new high-capacity tubes for electrified passenger trains, new roadway and railroad bridges, new rail systems and tracks, and a new station at West Baltimore, the B&P Tunnel Replacement Program will modernize and transform a four-mile (6.4km) section of the Northeast Corridor.

Linking Baltimore’s Penn Station to Washington and Virginia, the existing 1.4-mile (2.25km) B&P Tunnel is almost 150 years old and Amtrak’s oldest tunnel. Several age-related issues such as excessive water infiltration, a deteriorating structure, and a sinking floor are this tunnel’s problems. Also, it suffers from not existing a fire and life safety systems and excessive costly maintenance is required. The state of the tunnel means more than 10% of weekday trains are delayed.

According to Amtrak’s executive vice-president of capital delivery, Laura Mason: “This is a major milestone for the B&P Tunnel Replacement Program and this contract includes several critical elements of the project. Amtrak will be procuring multiple construction contracts as part of the program, which will include the construction of the new Frederick Douglass Tunnel, and other supporting investments, such as new bridges and railroad infrastructure, improving this vital stretch of the Northeast Corridor for generations to come.”

The determined deadline for delivery of letters of interest to Amtrak is the close of business on July 8, 2022, while it is estimated a Request for Proposal (RFP) will be issued in August 2022.