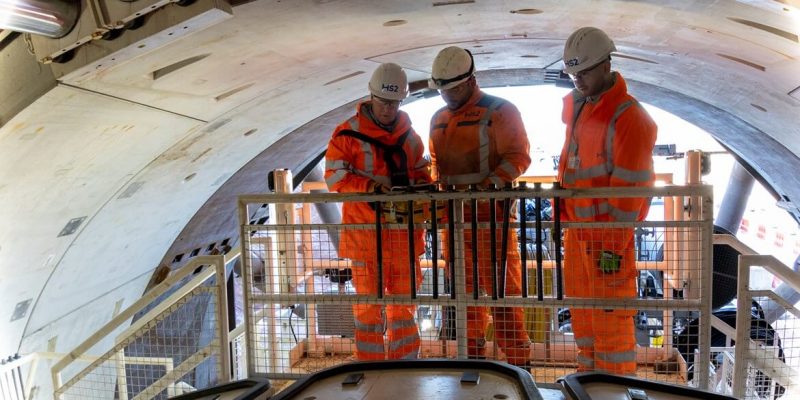 On 2 December 2021, HS2’s tunnel boring machine’s one-mile drive beneath Long Itchington Wood in Warwickshire was commenced by HS2 CEO Mark Thurston, which was an indication of the launch of the first TBM on the Midlands section of HS2.

This TBM with 2,000 tons’ weight and 125m length, recruited almost 170 engineers during its construction and assembly process, and currently a professional tunneling team is due to have approximately 24hours shifts in order to assist machine’s almost five months’ operation and excavates in the first bore of the one-mile tunnel. (Watch the video below)

“This is yet another vital landmark in our journey towards a better-connected Britain and with the launching of Dorothy today in Warwickshire, shows real progress in helping transform journeys across our country,” said HS2 Minister Andrew Stephenson.

He continued: “It also underlines how our £96bn Integrated Rail Plan – the largest ever investment in our rail network – is instrumental in creating jobs and economic opportunities, and ensuring more people reap the benefits of better rail journeys.”

While the machine is due to start its initial tunneling at the south portal in Spring 2022, this will be the HS2’s first tunnel to be completed on the project using this TBM. Additionally, the next step is disassembling and returning the TBM to the north portal to excavate the second bore, which’s completion date is in early 2023.

The tunnel, which will preserve the ancient woodland above, forms a key element in how HS2 is managing environmental impacts through the design of the railway, preserving Britain’s precious wildlife habitats. These woods are classified as a Site of Special Scientific Interest (SSSI) and have complex ecosystems that have taken hundreds of years to establish.

According to HS2 CEO Mark Thurston: “Today is another major milestone for HS2. You can see the real progress the project is making as we launch this TBM on one of HS2’s largest sites in the Midlands, contributing to massive job creation in the region.”

“More than 20,000 jobs and over 650 apprenticeships are already being supported by HS2, which is set to transform transport links between Britain’s major cities, free up space on the rail network for more freight and local services, and support the UK’s transition to net-zero carbon emissions,” added Mark Thurston.

Whole of 250,000 cubic meters of mudstone and soil which are going to be removed by machine, will be carried to the on-site slurry treatment plant to be separated out before being reused on embankments and landscaping along the route.

He also asserted: “As Dorothy, our cutting-edge Tunnel Boring Machine, sets off on her one-mile journey, our work across the northern section of HS2 continues to progress at pace. Over the next few months, we’ll be building on our efforts to recruit the 7,000 people required across the Midlands to help us shape the UK’s future infrastructure landscape; those who will see their work enjoyed for many years.”

For further details on this project please visit this website.