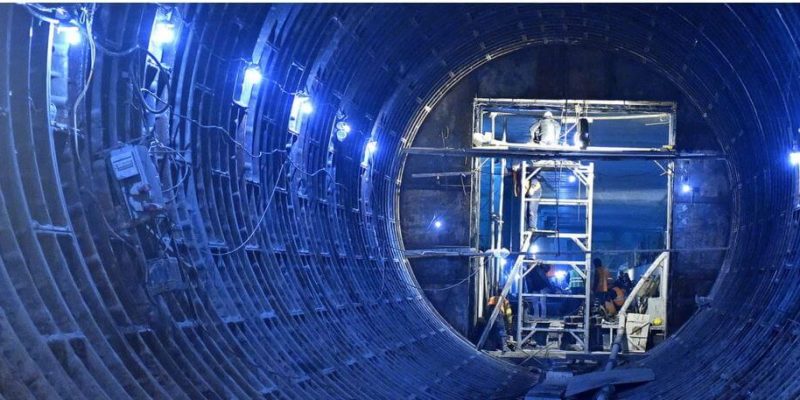 According to Andrey Bochkarev, Deputy Mayor of Moscow in the Moscow Government for urban planning policy and construction, the construction process of left running tunnel among the future stations Vavilovskaya and Innovatorskaya of the promising Troitskaya line of the metropolitan subway, has been commenced by Tunnel Boring Mechanized Complex (TPMK) Lyudmila.

Andrey Bochkarev continued: “The drilling of the left distillation tunnel between the Vavilovskaya and Novatorskaya stations under construction on the future Troitskaya metro line has begun, the work is being carried out by the Herrenknecht S-484 shield named Lyudmila with a diameter of 6 meters.”

Moreover, currently the installation process of the enclosing structures of the pit is being completed, and digging work is already in full swing, in particular excavation at the Vavilovskaya station itself, where Lyudmila began work.

“At the same time, the construction of both distillation tunnels towards the Akademicheskaya continues. The construction of the central section will ensure the necessary integration of the Troitskaya line into the transport network of Moscow, creating an additional link with the metro and MCC stations,” added Andrey Bochkarev.

In accordance with the head of the Construction Complex: “The neighboring section of this branch from Novatorskaya to Bachurinskaya is in a higher degree of construction readiness, the tunneling of its penultimate, the ninth, tunnel was recently completed by TPMK Evgenia, which connected the future stations Mamyri and Bachurinskaya.”

Additionally, as the general Director of Mosinzhproekt JSC, Yuri Kravtsov stated providing the necessary link among the central section of the Troitskaya branch and the section from Novatorskaya to Bachurinskaya will be done by construction of the haul from the Vavilovskaya station.

Yuri Kravtsov also asserted: “The length of the future tunnel will be more than 1,400 meters, it will pass under the roadway of Leninsky Prospekt in soils of fine and silty sands, replaced by soils of semi-solid loams mixed with crushed stone.”

Furthermore, due to multiple engineering communications along the route of the future tunnel and a pedestrian underpass beneath Leninsky Prospekt, the work was complicated.

“Previously, this tunnel-boring shield was used in the construction of the Kalininsky and Solntsevsky subway radii, passing in total more than 9 km of underground routes,” recalled Yuri Kravtsov.