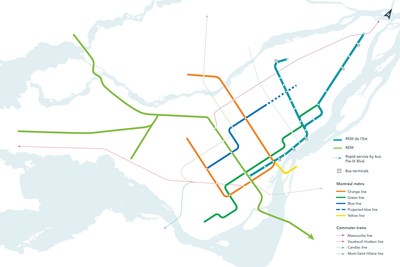 The commencing key of the second phase of a Montreal metro project is pressed and this project is going to add 23 stations across 32km of track in Quebec, Canada.

The starting up process of the notice to the market for the second phase of the infrastructure project, the Réseau express métropolitain de l’Est (REM de l’Est), has been done by Caisse de dépôt et placement du Québec (CDPQ) Infra.

While the starting date of constructing first phase of the infrastructure project, the Réseau express métropolitain (REM) was in 2018, the REM de l’Est, with C$10bn (£5.9bn) value, is going to begin in 2023 and will be an integrated, fully automated electric light metro public transit project, with 32km of track and 23 new stations.

Providing a faster link among downtown Montréal and neighborhoods in the east and northeast of the city, is one of the advantages of this phase of the project.

A tunnel with 8.5km length, which’s commencing location will be at Jeanne-Mance Park and continue to Robert-Bourassa Boulevard, seven stations underground, and almost 700m of tunnel downtown, are due to be subsets of the underground segment of this project.

The project, announced in December 2020, is still at the detailed planning stage, with several major steps yet to be completed.

Although the building of this phase is planned to start in 2023, the estimated date for first launching is 2029.