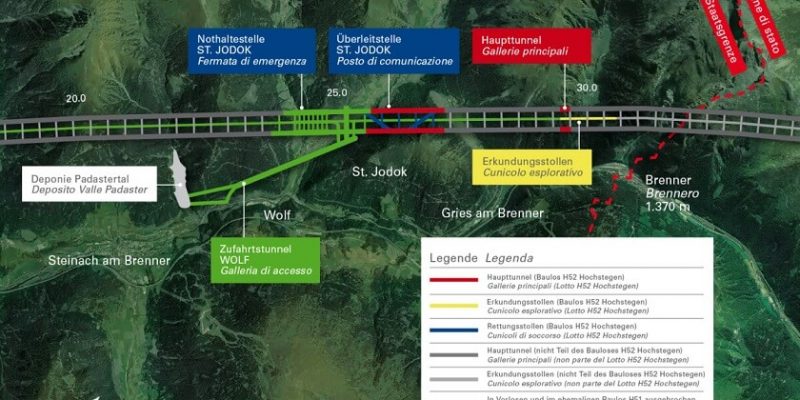 With the attendance of Maria Lorenzatto, godmother of the tunnel, along with the various authorities and companies involved, a groundbreaking ceremony was held for Lot H52 Hochstegen on 4 May 2022. The excavation process for Lot H52 Hochstegen of the East main tube in the south direction has now officially commenced with a blast in the eastern main tunnel.

As a part of the former lot H51 Pfons-Brenner, Lot H52 Hochstegen, in the territory of the municipality of Steinach am Brenner in the Wipptal valley in Tyrol was subject to a re-planning. More quickly and efficiently advancement of the works will be able by redistribution of the works, with a separate tender and the commencement of work on Lot H52 Hochstegen at the BBT project.

Locating in a fault zone characterized by a particularly complex geological context: over a stretch of around 500 m, aquifer layers of carbonate rock predominate, Lot H52 Hochstegen was granted to the company Swietelsky Tunnelbau GmbH & Co KG. The boring of this section in a southerly direction, through the so-called Hochstegen zone, must therefore be carried out after stabilization and sealing injections.

The excavation process of 151 km of the 230 km long BBT tunnel system has been completed now, which covers nearly two-thirds of the entire length, while at present, works are being executed in 5 adjacent construction lots. On 19/05/2022 a breakthrough is expected between the Eisack riverbed and Mules sites.

Pawtucket Tunnel TBM Arrives in the US