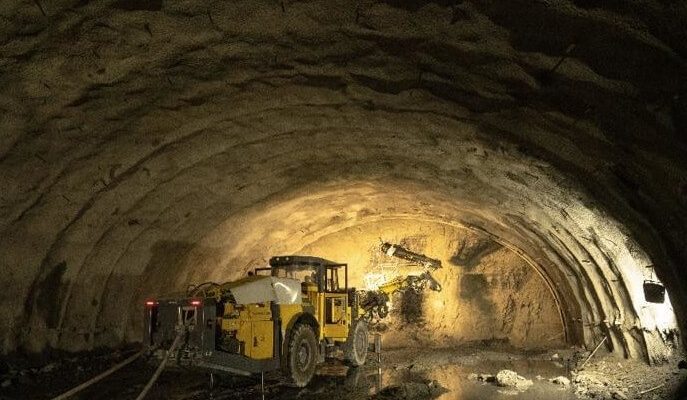 Stretching through extreme hilly terrain in northern India, the tunneling process of a package of the Char Dham railway tunnel has passed more than halfway through by the effort of the Megha Engineering & Infrastructures (MEIL).

The Rishikesh – Karnaprayag Railway Tunnel project with 125.2km length runs through Uttarakhand, a state in northern India crossed by the Himalayas and the broad-gauge line route is due to involve 35 bridges, 17 tunnels, and 12 stations.

The digging process of10km out of 19km of tunnel required for a section of the railway that runs from Narkota to Sumerpur, along with 19 cross passages, for package 7B, has been completed by MEIL.

Additionally, the twin-tube tunnel (T13) that includes a main tunnel with 10-km length as well as a 9-km-long escape tunnel, is assigned 9.5km long section of the intended route to itself. MEIL is also going to construct 33 cross passages among the main and escape tunnels.

As the responsible of this project, the Indian government-owned rail infrastructure company Rail Vikas Nigam Limited (RVNL) has divided it 9 packages, while the 7B and 8 packages are up to MEIL and the progressive New Austrian tunneling method (NATM) technology is being used by company for excavating and drilling the tunnel section for 7B.

Due to advancing the current tunneling works in extremely hilly terrain at an altitude of 685m above sea level in the eastern Himalayan ranges, the MEIL has faced major challenges.

Considering the result of works that have been completed in just 18 months until now, it is clear that MEIL has appointed a 1,000-strong workforce to work 24/7 in order to ensure the tunneling process is implementing on time.

Moreover, installation of vibro meters, blasting alarms, and hooters to ensure the health and safety of its workers during the blasting works necessary for the excavation and tunneling, has been done by company.

According to MEIL associate vice president Srinath Reddy: “We are working hard round-the-clock with RVNL officials to complete this project on time. We are proud to be part of the nation’s important strategic project and for Uttarakhand’s development.”

Running from Sumerpur to Gaucher and railway station yards at Gholtir and Gaucher, construction of a 13.5-km-long twin tube tunnel is a subset of package 8, whereas this package also will include building of 45 cross passages between the main and escape tunnels, three bridges and two cut and cover tunnels.

Considering as a project of national strategic importance in India, the Karnaprayag Railway Tunnel is expected to improve connectivity to the Char Dham shrines of Yamunotri, Gangotri, Badrinath and Kedarnath in the Garhwal region of the Himalayas in Uttarakhand, following its completion.

Currently, travelers and pilgrims must travel through narrow roads which are prone to mud and landslides due to frequent rains.

Copenhagen Road Tunnel Project – Besix is the Winner of Contract