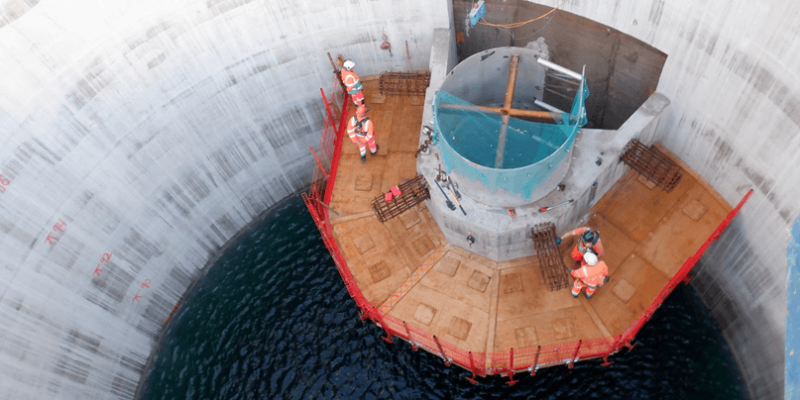 A “plunge pool” with 40m depth has been created by contractors working on the Tideway scheme, which’s value is £4.1bn, to present the right situations for a tunnel boring machine (TBM) to pass underneath.

The Earl Pumping Station before the entrance of TBM Annie had a shaft full of water, which was done by the consortium of Costain, Vinci Construction Grands Projets, and Bachy Soletanche overseeing the eastern leg of London’s super sewer.

The name of this TBM is in honor of Annie Scott Dill Russell, the Greenwich Observatory’s first female scientist. In previous December, the 6.4m wide Herrenknecht machine commenced excavating a 4.5km connection tunnel between Greenwich Pumping Station and the main Tideway tunnel at Chambers Wharf.

In order to release sewage directly from the present network into the Greenwich Connection Tunnel that is under excavation by Annie, a 50m deep shaft has been dug at Earl Pumping Station.

A base slab has been installed at the Earl shaft, with cement and then the huge volume of water placed above.

According to Brooke Knight, project manager at Earl Pumping Station: “This is part of our preparation to welcome TBM Annie to Earl Pumping Station, as she digs the Greenwich Connection Tunnel. The 40m deep pool of water will balance the ground pressure when TBM Annie tunnels underneath, allowing us to tunnel straight into the shaft.”

“At tunneling depth, the ground conditions in this part of London can be challenging because of the large flints and possible fissures in the chalk, so tunneling and shaft excavation has required a huge amount of preparation,” added Knight

Advancing beneath the Vauxhall Bridge in central London with a 30m tunnel in the current week, was a landmark moment for Tideway chiefs.

The super sewer project is due to be completed by 2025.