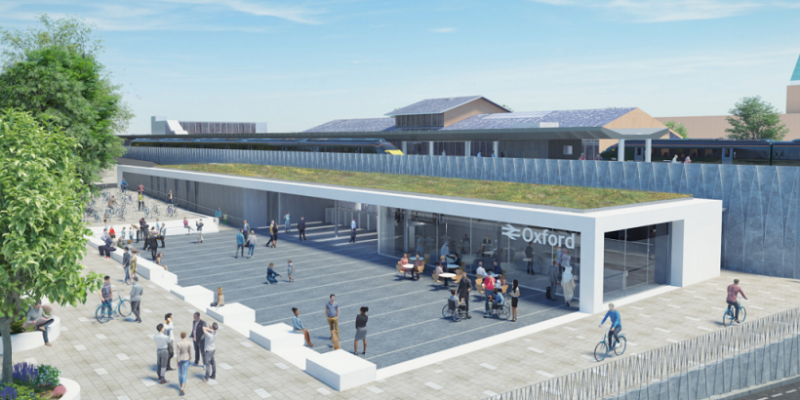 The start key of enabling works for Network Rail‘s capacity increase upgrade at Oxford Station, has been pressed by Kier.

In order to diversion of utilities, groundwork preparations such as water, gas, electricity and broadband, commenced yesterday as part of the Oxford Corridor Phase 2 project.

Increasing the service capacity of the station by 2024 is main intention of this project, while it involves the construction of a new track, platform and accessible entrance on the west side of the station.

According to Network Rail: “Initially there will be ground investigation work at various sites, so that closer inspections can be done of the pipes and wires. The sites will include: junction of Mill Street with Botley Road, junction of Becket Street and Botley Road Becket Street car park. In addition to that, a number of bore holes need to be drilled at sites around the old YHA building, where the new entrance will go, including four into the road surface itself. This work is required to give a thorough understanding of the ground beneath and help finalize the designs.”

As Wendy Morton the ex-rail minister announced in August 2022, the determined budget for this project would be £161M by government.

Meanwhile, in order to delivering the main work package of the project worth £65M, Kier was granted the contract having won the enabling works contract in March.

Also implementing some improvements to the railway and the area around the station, as well as the station upgrade, will be enable using the funding from the Department for Transport.

As one of the busiest stations in the south outside of London, Oxford managed over than 8.5M passengers a year before the pandemic, which has been recovering strongly. Improving the safety of the line, creating capacity for additional Oxford to Birmingham passenger services and decreasing journey times by up to two minutes, are due to be the new track and platform’s advantages.

Additionally, the future plan covers Roger Dudman Way realigning process which is going to see the replacement of Sheepwash Bridge to improve safety at the junction with Botley Road, whereas demolition of various buildings in close proximity to the station will be part of this project.

November 2021 was the date of prior approval of Network Rail’s application for the station revamp was approved by Oxford City Planning Committee.

The rail operator was then granted a Transport Works Act Order, enabling it to formally acquire powers to expand Oxford station in June of this year.