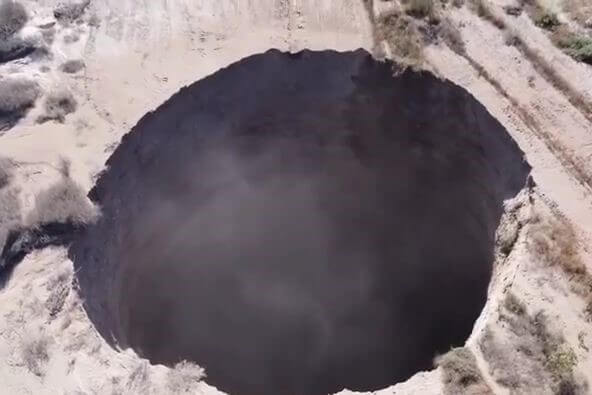 On 30 July 2022 at almost 4.30 pm, an enormous hole has displayed close to Lundin Mining‘s underground copper mining operation in Chile. With about 50m diameter and 200m deep, this ground collapse appeared above the Alcaparrosa underground mine and a 100m security perimeter has been established around the area of subsidence.

Lunding Mining said: “The area was immediately isolated and relevant regulatory authorities were notified. The sinkhole has remained stable since its detection. No personnel, equipment, or infrastructure was affected by the collapse.”

Although the owner of the majority stake in the complex is Canadian firm Lundin Mining, these mines are operated by Candelaria.

Following the emersion of the ground collapse, Chile’s National Geology and Mining Service, Sernageomin, ordered an interim suspension of activities at the Alcaparrosa mine.

According to Sernageomin’s statement, in order to respond to the concerns of the nearby Tierra Amarilla community, this decision was made.

The agency deployed geomechanics experts to the site after the ground collapse to collect information and prepare a technical report on the cause of the incident. Lundin Mining said its local subsidiary was also conducting a technical analysis.

Concentrating on checking the presence of water in the mine galleries, was the previous week’s issue of the project (Saturday, 6 August) as Sernageomin said, whereas it was in order to ensure that the situation stays under control. There are also extractor pumps working to normalize the situation.

Additionally, surveying the mine’s chambers, particularly the one placed underneath the ground collapse, which the company thinks might be overexploited, was done.

Professionals from the Regional Directorate and from the central level of Sernageomin also toured the area verifying what had happened, to see if there were any cracks, and to check the mine’s current state.

According to Sernageomin national director David Montenegro: “This event did not affect people, equipment or facilities either inside or on the surface of the mine. The company suspended the work located in the vertical of the sinkhole, trying, at all times, to protect the people who work in Alcaparrosa.”

He added: “Sernageomin specialists worked together with the company to clarify the causes and ensure that all security measures are taken to safeguard the lives of workers and communities near the site.”