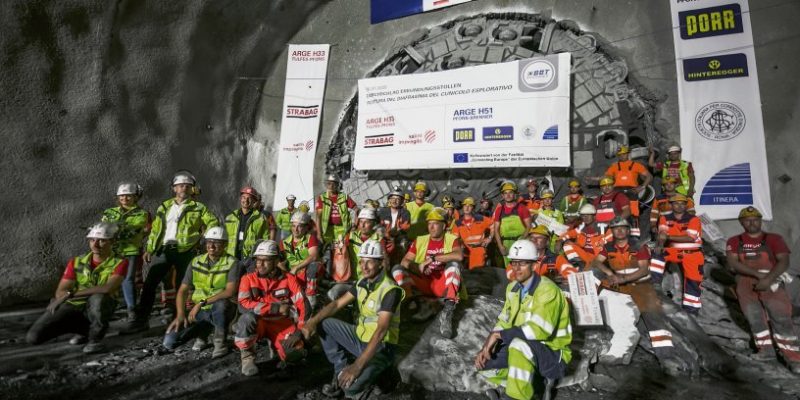 Tunnellers on the Brenner Base Tunnel set a new milestone on Wednesday, March 31, 2021, when excavating the main 8.1m i.d. tubes in South Tyrol – 860m of tunnel drilled and lined in one month.

With substantial progress made on the Italian side of the Brenner Base Tunnel (BBT) project by contracting joi, construction of the new rail tunnels across the Alps has set a new milestone for the project. The world record for tunnel boring and lining in a month was set in March on the Mules 2-3 section, but progress on what will be the world’s longest underground rail route has just recently been revealed.

BTC is driving three Herrenknecht tunnel boring machines (TBM) from south to north on the highway to main bores and an exploratory tunnel that will later be used as a service tunnel.

Herrenknecht credited the stable geology – carbonate and limestone schists – through which BTC is driving through, along with the capability of the double shield TBMs, as the main reasons behind the new project record.

The completed BBT will run from Innsbruck, Austria, to Franzensfeste, South Tyrol, Italy, which will have 230 kilometers of tunnels. There are four major building sites: two in Italy, two in Austria (see box), and a river underpass underneath the Isarco river in Italy.

In April, significant progress was made on the tunnel under the Isarco channel, with a milestone on the 57th mile. The work is being delivered by the Isarco joint venture formed by Webuild, Strabag, Consorzio Integra and Collini Lavori and will link Brenner Base Tunnel with the existing Brenner line and the railway station in Fortezza.

Three Herrenknecht TBMs are boring from south to north on the mega-Italian project’s building lot “Mauls 2-3,” excavating the two major running tunnels as well as an exploratory and later utility tunnel 12 meters underground. The contracting joint partnership BTC S.c.a.r.l. (Astaldi S.p.A., Ghella S.p.A., P.A.C. S.p.A., and Cogeis S.p.A.) set the mark in March 2021 when pushing one of the three mammoths.

In March 2021, the Brenner Base Tunnel project owner, Austrian-Italian BBT SE, also announced an average daily advance rate of 27.7m for “Virginia” with a best daily performance of 36.75m.

Dr. Matthias Flora, Sales and Project Manager at Herrenknecht, congratulated the team on the jobsite: “Our customer BTC’s crews are absolute top professionals in their field. Congratulations and our utmost respect for this achievement!”

The two machines in the Brenner main tunnels had already covered over half of the overall distance to their lot boundary by early April 2021.

The Brenner Base Tunnel, which is being built for the Austrian-Italian BBT SE, will be the world’s longest underground rail route with a total length of 64 kilometers. From Innsbruck, Austria, and Franzensfeste, Switzerland, it runs under the Alps.