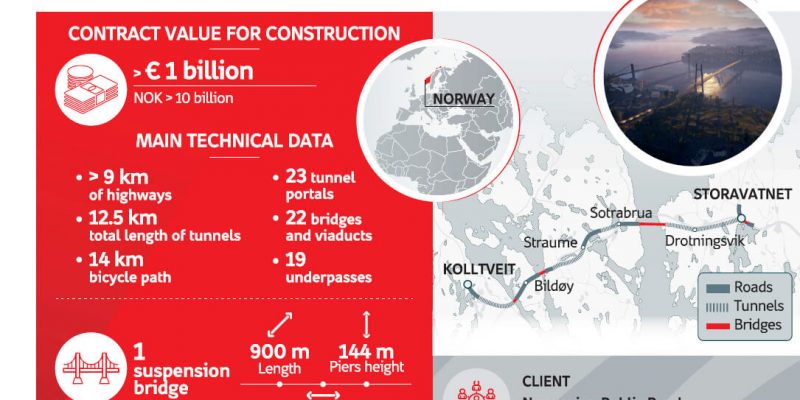 In the largest transport project in Norwegian history, Webuild has reached financial closure on the Sotra Connection PPP Project.

Improving the link among Bergen and the island of Sotra on Norway’s west coast, the public-private partnership (PPP) contract, which’s total value is NOK19.8bn (US$2.2bn/€2bn) and more than €1bn of will be for design and construction, while it was the biggest project of its kind to be awarded in Europe in 2021.

The four-lane road link with 9.4km length includes a 4.6km long twin-tube tunnel, 7.9km of secondary tunnels and a four-lane, 900m-long bridge, as well as road and pedestrian underpasses, tunnel portals, smaller bridges and viaducts, and pedestrian and bicycle paths.

The shareholders of this project’s design and construction will be an international consortium comprising of Webuild with a 35% stake, Spain’s FCC Construcción with 35%, and South Korea’s SK ecoplant with 30%. Although the entire contract is being managed by Sotra Link AS, Webuild holds a 10% stake, Australia’s Macquarie Capital 70%, and SK ecoplant 20%. Operation and maintenance of the network for 25 years after its inauguration to traffic in 2027 will be done by Sotra Link AS, whereas the client is the Norwegian Public Roads Administration.

The tender included a Climate Budget and Webuild chief executive Pietro Salini said the project would illustrate best practices in innovation and sustainability.

The Winner of HS2 Euston Utilities Contract is Barhale