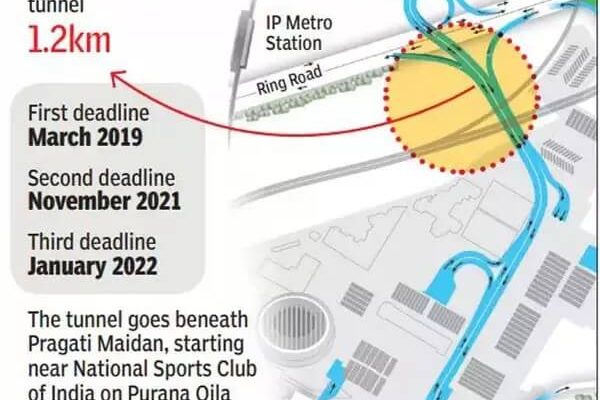 Although the PWD (Public Works Department) has anticipated the completion of the Pragati Maidan at the end of January, there actually are important issues still in the way.

In the premier, the agency is not unable to procure adequate bitumen for road carpeting, without which the underground road is going to be unusable.

As a PWD official noted, when pollution in the city hit a high, the authorities imposed a ban on the operation of hot-mix plants generating bituminous road construction material, leading to a shortage at Pragati Maidan.

The official stated: “We somehow got permission for one hot-mix plant in Palwal, Haryana, to function and we are procuring bituminous material from there, but it is simply not enough for the work at hand.”

He also added: “It will take us more days to finish the tunnel if we are unable to get more road carpeting material. We have requested that other hot-mix plants be allowed so that we can finish the work on time.”

Earlier, PWD procured bitumen from plants in Ghaziabad and Sahibabad too. Bringing the macadam material from such distances is an important issue since the night temperatures have dropped when a minimum temperature of 15 degrees Celsius is mandatory to spread the material on the road evenly before it solidifies.

Another key problem is Covid-19 infection among workers. Two project officials are down with the infection.

The project has the purpose to decongest the roads near Pragati Maidan. The tunnel road goes under Pragati Maidan, beginning around the National Sports Club of India on Purana Qila Road and ending on the other side on Ring Road near the Pragati power station.

The 1.2-km tunnel and the six underpasses — five on Mathura Road and one on Ring Road —is going to decrease snarls for the predicted one lakh motorists using the ITO intersection every day.

Moreover, the Bhairon Marg section is going to faceless traffic congestion once this tunnel is operational. Two of the five underpasses on Mathura Road are near Sundar Nagar and three are between Pragati Maidan and Supreme Court. The underpass on the Ring Road links it with Bhairon Marg.

First Acoustic Shed to Come Down as Metro Tunnel Carries On