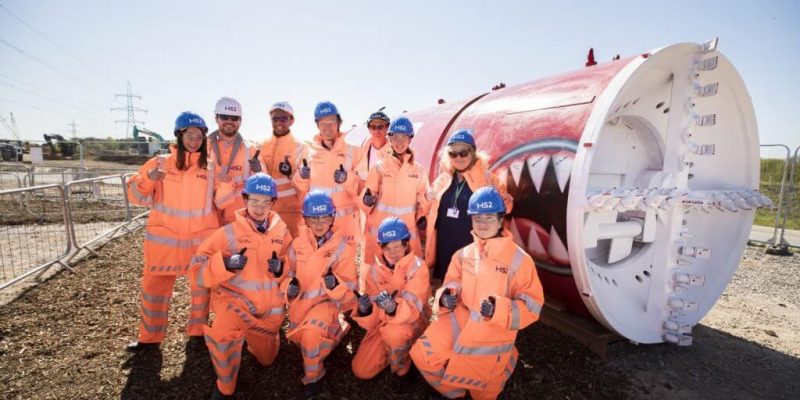 In order to excavate a 300m long drainage tunnel near the north portal of the High Speed 2 (HS2) Chiltern tunnel in Buckinghamshire, two mini tunnel boring machine (TBM) is considered and this is the first one.

With 8.9m length and 19t weight, this machine has been named Lizzie after the Queen and will be launched in the coming weeks.

The intended TBM is a miniature version of the two 170m long Herrenknecht TBMs, Florence and Cecilia, which are digging the 16km long twin-bore tunnel under the Chiltern Hills at the moment.

Most of the route north of the Chiltern tunnel from South Heath to Wendover is set low in the landscape in a series of cuttings, so the drainage tunnel is needed to help rainwater run-off.

Including the Eiffage, Kier, Ferrovial Construction, and Bam Nuttall, the responsibility of constructing this tunnel is up to HS2 Ltd’s main works contractor EKFB, while this team is working with specialist tunneling contractor Active Tunneling.

Operating with a daily speed of almost 5m, Lizzie is due to excavate and line the tunnel with 120 concrete jacking pipes, whereas the machine will be operated by just six people, compared to the 17 person crews that operate Florence and Cecilia.

The name Lizzie was chosen by students from the nearby the Misbourne school, who visited the site last week to see the arrival of the TBM.

According to HS2 Ltd’s project client Rohan Perin: “With construction now well underway, it’s great to be able to welcome students from the Misbourne to site and hopefully inspire them to look at careers in science and technology. Lizzie may be significantly smaller than our other TBMs, but she will still play a vital role in the delivery of the new railway.”

Following excavating a combined total of over 5.8km from the tunnel’s south portal to the ventilation shaft at Chalfont St Peter, Florence and Cecilia completed the first stage of the Chiltern tunnel in March 2022.

Considering that the Florence and Cecilia have been launched in the previous summer, they are expected to spend three years tunneling the Chiltern tunnel, which is the longest on the HS2 route between London and Crewe.