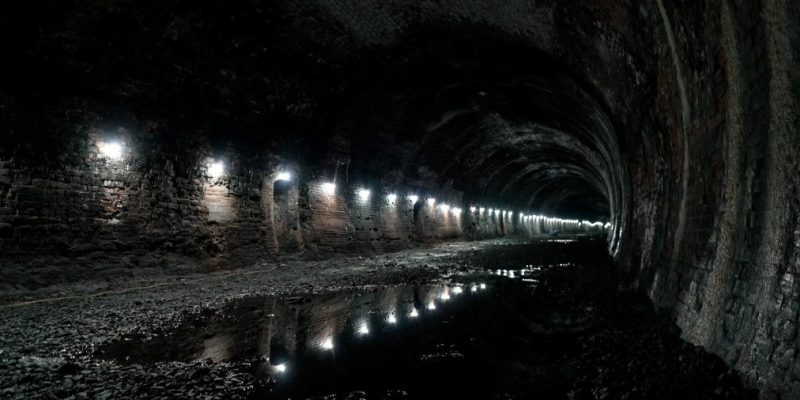 The cosmic ray technology used to find secret chambers in the Great Pyramid at Giza is aiding National Highways to unlock the secrets of a historic railway tunnel located deep below the streets of Glasgow.

Balgray Tunnel, constructed in 1896, curves for 640 meters under the busy Kelvinside area of Glasgow, closed in 1964 and still needs regular inspections to assure it remains safe and in good order.

Up to this point, approaches such as ground penetrating radar, drilling, and visual inspections have been used to check for hidden shafts and highlight possible issues.

Now muon imaging which is a novel process that harnesses cosmic rays from space to produce powerful x-ray-like images is being used to search for probable defects and voids without having to be in physical contact with the tunnel walls and ceiling – so avoiding the need for access at height.

National Highways is working with Hampshire-based tech firm Geoptic for the trial at Balgray Tunnel, one of over 3,000 former railway structures supported by National Highways Historical Railways Estate (HRE) on behalf of owners, the Department for Transport.

Geoptic company has adapted the muon process for service in railway tunnels, and the technology’s first-time usage is the Balgray survey and on an HRE tunnel.

Helene Rossiter, the head of the National Highways Historical Railway Estate program, stated: “Ensuring all our structures remain safe and in good maintenance is our priority and we’re very eager to see the results of this unique technique and evaluate how it might help us carry out some of our tunnel surveys more efficiently in the future.”

She continued: “Inspections of all our historic railway tunnels are a key part of the maintenance routine and if the Balgray Tunnel trial is successful we could look to use the technology in other tunnel surveys in the HRE.”

Muon tomography counts on cosmic rays, high-energy particles, generated by the sun and other astronomical sources that hurtle through space at close to the speed of light. When they enter the earth’s atmosphere, they collide with the oxygen and nitrogen molecules, which triggers a cascade of other particles. Most of these particles are stopped in the atmosphere, but muons particles make it to the ground.

A muon is 200 times heavier than an electron, and its weight and speed give it an advantage over x-rays in penetrating dense materials. At sea level, there are roughly 10,000 muons passing through every square meter of the ground every minute, and these can be used to image the interior of great engineering infrastructures. Muons can penetrate through hundreds of meters of materials such as brick, rock and concrete.

The technology was applied to survey the Great Pyramid at Giza in 2017, which resulted in the discovery of hidden chambers and rooms untouched by human hands since the Pyramid was constructed more than 4500 years ago. The greatest discovery was a 100-feet-long void above the grand gallery. Yet, more surveys are scheduled this year.

Moreover, muon tomography has been used to search for magma chambers inside active volcanoes and image the Fukushima nuclear reactors.

During the Victorian era, engineers-built shafts along the line of a tunnel to boost the construction process and assist in maintaining the tunnel’s alignment, specifically on curves.

After finishing a tunnel, some of the shafts would be kept for ventilation, and others capped at both ends or backfilled, and assumed stable. What is significant for the maintenance and safety of the tunnel, is being able to locate and survey hidden closed shafts and other voids in the structure.

The Construction of the Tunnel Under Swina Was Completed in October

Effort of Porr Courts for Advancing the Low Carbon Mortar