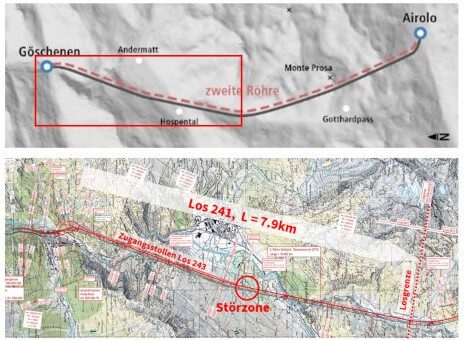 With the value of CHF467m (US$491m), the contract for the main northern section of the Gotthard road tunnel’s second tube has been granted to a consortium of Implenia and Frutiger, while the works for the 7.9km section (Lot 241) is expanding up to the lot boundary in the middle of the tunnel. The determined date for commencing the construction process will be this year, whereas it is scheduled for completion in 2029.

Being dug by a TBM with tubing, the main element of the work is a 7.3km-long, 12.3m diameter tunnel, and the intended tunnel links to a 160m-long stretch at the start, which is due to be excavated conventionally.

Additionally, the other content of this contract, which has been awarded by the Swiss Federal Roads Office (FEDRO), is a conventional tunnel with a 430 m length through the northern disturbance zone, which is going to be excavated from the 4km-long northern access tunnel that is now under building. Then by pulling out the TBM through this section of the disturbance zone and changing its cutterhead, it will complete the remaining tunneling through to the lot boundary.

Also, in order to implement two underground ventilation centers, as well as create an underground concrete plant and production halls for tubing rings and service ducts in former military caverns, the joint venture will undertake a highly complex excavation.

Inaugurating in 1980, the existing road tunnel that carries traffic in both directions is the route that the new Gotthard tunnel runs 70m to the east of it. Following the completion of this new tunnel, the older tunnel is due to be refurbished and each tunnel will have a single lane of traffic.