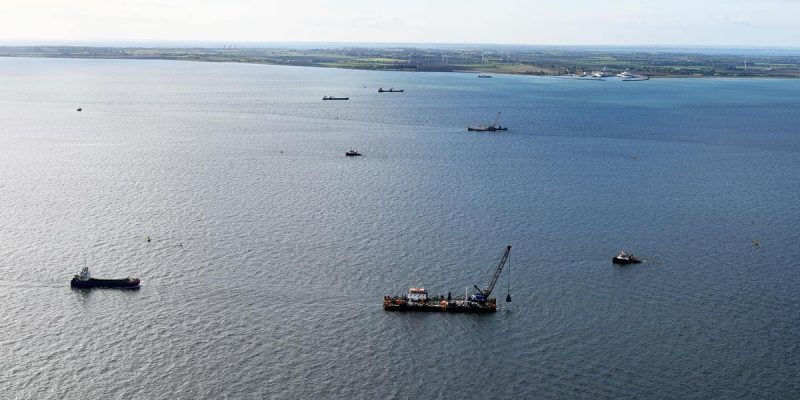 With advancing a controlled explosion, a Second World War depth charge near the tunnel alignment for the Fehmarnbelt Fixed Link was due to be removed on 17 October.

While the investigation process had been done by the client, Femern A/S, in and around the tunnel alignment in order to finding any remnants of the war, before commencing dredging operations for the Fehmarnbelt tunnel, these unexploded munitions were discovered in the Danish and German parts of the Fehmarnbelt in spring 2021. With the exception of this German depth charge, all finds have since been salvaged and rendered harmless.

The Danish side of the Fehmarnbelt near the German border and the Natura 2000 area Fehmarnbelt, is the location of finding this German depth charge that is a type D II and weighs 125kg.

In order to decreasing the underwater noise from the detonation, a bubble curtain will be used before the bomb is detonated. ALso acoustic deterrents, such as pingers and seal-scarers, is set to be used to keep marine mammals, such as porpoises and seals, away from the affected area. Whale watchers will also be deployed to monitor the surrounding area.

According to the Fermern technical director Jens Ole Kaslund: “Due to the proximity to the nature protection area and the German border, Femern A/S has carefully co-ordinated the operation with the relevant German and Danish authorities. The disposal of the bomb is crucial for us to begin the immersion of the tunnel elements from 2024.”

The responsibility of providing a bubble curtain available for any potential detonations in the project area was up to Femern A/S during the negotiations period at the German Administrative Court in autumn 2020.

As the current largest construction project in northern Europe, Fehmarnbelt project will connect Germany and Denmark via an 18km immersed tube tunnel under the Baltic Sea.

Consisting of 79 217m-long hollow, reinforced concrete elements and 10 special elements, the intended project is scheduled to be inaugurated in 2029, whereas it is going to be the world’s longest immersed tube tunnel and the longest combined road and rail tunnel underwater.