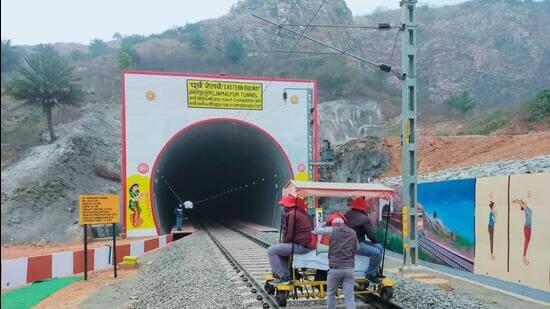 Ranking as the highest pace ever achieved on the path, a special train including nine bogies crossed through the tunnel at a speed of 125 km per hour, while the attained speed in the first trial was 121 km per hour. and this prosperous trial run, caused train services to be commenced through the new tunnel.

The second rail tunnel of Bihar with an approximate length of 903-feet is placed in Munger and has been constructed 157 years later adjacent to the earlier one, whereas the first one has been built in the 1861-1865 period among Jamalpur-Bhagalpur-Sahebganj loop lines was in Munger district.

Beginning the construction process since 22 October 2019, the new tunnel cutting through Bariakol hill near Jamalpur railway station was completed in 2022. This rail tunnel will present the glorious story of Munger. A sidewall has been made at both its entrance and exit. The historical, religious heritage of the district has been presented through paintings on these walls.

Following an inspection by the Commissioner of Railway Safety (CRS) AM Choudhary and Malda divisional railway manager (DRM) Yatendra Kumar, a test run was done through the tunnel.

According to Malda DRM on Saturday: “A special train with nine bogies passed through the tunnel at a speed of 125 km per hour, the highest ever achieved on the route. In the first trial, a speed of 121 km per hour was achieved. After the successful trial run, train services have been started through the new tunnel. A six feet pathway will also be built on both sides inside the tunnel for peddlers.”

“The tunnel would be of immense help in maintaining the schedule of trains, as there will be no problem of level crossings anymore. Earlier, a train coming on the Up-line meant that another train coming from the other side had to be stopped at Jamalpur or Ratanapur, as only one train could pass at a time. Now, the Rajdhani Express can also run through the route due to its ability to handle a high speed of 125 km per hour,” stated Railway officials.

On the left hand of the entrance of the new tunnel, a colossal canvas has been located before coming from Bariarpur towards Jamalpur, that illustrates over than a dozen historical pictures. The picture displays dozens of historical monuments such as Haveli Kharagpur Lake, Sri Krishna Setu, Munger Gang Bridge, Kash Harni Ghat, Bhima Dam, Munger Fort, Chandikasthan. Several historical monuments comprising of Munger’s Karna Chauraha, Yoga Ashram are shown through the picture once exiting the tunnel.