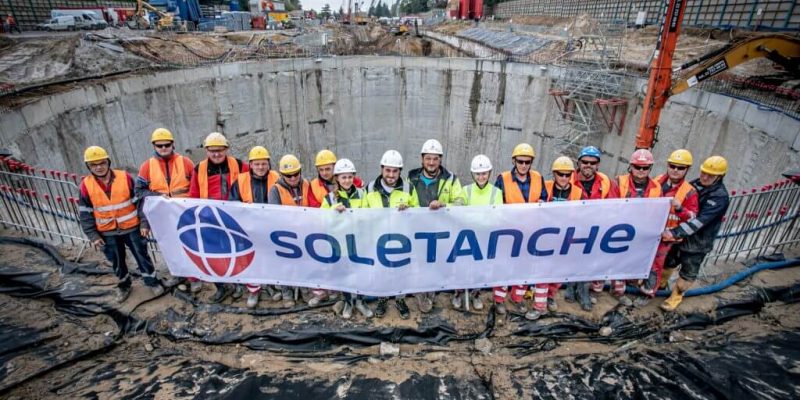 The two tunnel boring machine (TBM) launch chambers and station foundations for a railway line undergoing in the city of Lodz, Poland, is delivered by Soletanche Polska.

The project includes an open-air section among Lodz Widzew and Lodz Niciarniana and a tunneled section between Lodz Kaliska and Lodz Fabryczna stations.

Building of two circular TBM launch shafts amid Odolanowska and Stolarska streets, has been done by Soletanche Polska, while the shafts are being built using diaphragm walls connected with barrettes that anchor the foundation slab. The shaft’s 80cm thick and 35m deep walls have used 21,000m³ of concrete.

Through the usage of diaphragm walls with bars anchoring the foundation slab, a smaller circular launch shaft and chamber on Długosza street has been constructed. At 22m deep its 80cm thick walls have a surface area of 1,500m2. Following completion of works, a TBM named Faustyna with 8.7m diameter is due to start up from its chamber.

Because of secure support for deep trenches, as well as well performance in difficult soil conditions and in areas with high levels of groundwater, circular diaphragm walls have been opted by the contractor. The structures are made watertight using the Soletanche Bachy’s continuous water stop seal system.

Furthermore, the construction process of the foundations for Lodz Srodmiescie station is being done by the contractor, while they will involve building diaphragm walls up to 40m deep and 16,265m² in perimeter.

The station will comprise of three levels, with trains platforms placed on the second underground level. Locating in a busy urban area and situated between historic buildings, construction of the underground levels will be geotechnically challenging. The work will be carried out in stages to minimize the impact on traffic.

The other advantage of this new railway line will be transforming the city into an important transport junction in Poland. As part of the project, Lodz Fabryczna station will also be transformed from a terminal into a through the station, shortening transit times for domestic, national, and international connections through Lodz.