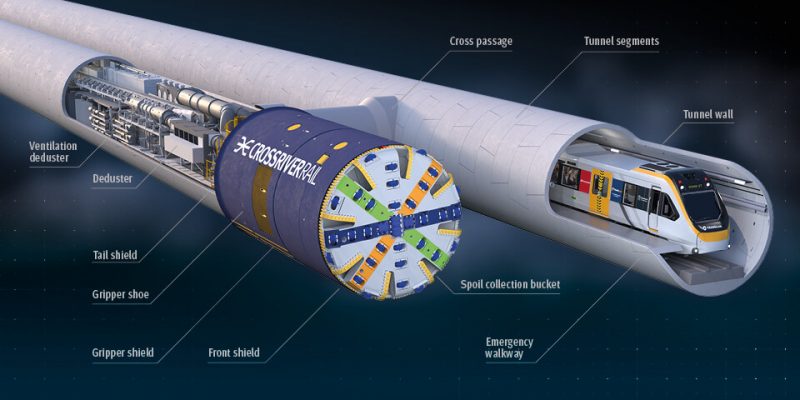 The first of Cross River Rail’s Tunnel Boring Machines has seen the daylight, for the first time in ten months.

The huge project is one of many which the Palaszczuk Government has delivered and is a significant part of the state’s COVID-19 Economic Recovery Plan. Premier Annastacia Palaszczuk adored the progress made on the transformational $5.4 billion Cross River Rail project.

The Premier stated: “This project was integral in delivering us the 2032 Olympic Games.”

“At the center of this project is 5.9 kilometers of twin tunnels under the Brisbane CBD. To have one of two tunnels already complete is a great coup. We’re investing in major infrastructure projects like this one to create jobs, ease congestion, and plan for the future. Cross River Rail will take thousands of cars off the road throughout southeast Queensland and will make it quicker and easier to commute in the River City.”

Steven Miles, the deputy Premier mentioned that the importance of the 1350-tonne TBM Else’s breakthrough at the project’s northern portal could not be understated.

Miles asserted: “To have one of the TBMs finish its journey today is a massive milestone.”

He added: “TBM Else has tunneled 3.8 kilometers from Woolloongabba, under the Brisbane River to Albert Street and then onto Roma Street to emerge here at Cross River Rail’s Northern Portal. “By unlocking the congested inner-city rail network, Cross River Rail will transform how we travel throughout South Eastern Queensland. This tunnel will service new stations being built in more convenient locations, including the Brisbane CBD’s first new station in more than a century. It will mean quicker journeys and help ease congestion on our roads.”

Mark Bailey, the Transport and Main Roads Minister declared that the milestone marked the end of the tunneling for TBM Else – named after trailblazing engineer Professor Else Shepherd AM.

He continued: “The TBMs have been an iconic part of this project, and today we acknowledge and congratulate the crews who made TBM Else’s journey below the Brisbane River and CBD a success.”

Else is going to be dismantled and then moved out of the northern portal piece-by-piece by the same 280-tonne gantry crane that lowered her into the Woolloongabba station box. The machine has undertaken a great job boring 155,000 cubic meters of the tunnel, the equivalent of 62 Olympic swimming pools.

Moreover, Merle (the Cross River Rail’s second mega TBM), is going to breakthrough in the coming weeks, marking an end to the project’s ‘year of tunneling’.

Education Minister and Member for McConnel Grace Grace stated the project’s northern portal at Normanby was a spectacular work site in its own right, with 40 workers making sure it was prepared for the arrival of the project’s two mega TBMs.

Ms. Grace said: “Crews have been working 24/7 to finish excavating the 12-meter-deep TBM extraction box, while also building the portal structure itself.”

“All up, 240 pre-cast roof components, each 18 meters wide and weighing almost 26 tonnes will be installed on-site, which is where trains will enter and exit the twin tunnels when Cross River Rail is operational,” added Grace.

Miles claimed that the $5.4 billion Cross River Rail project was a significant part of Queensland’s future, with the state’s population continuing to grow rapidly.

Pumping over $4 million per day into the economy, this essential project is assisting to drive Queensland’s economic recovery from COVID-19 and was vital to securing the 2032 Olympics.

With 88% of net interstate migration heading to Queensland in coming years, the next decade is about growth, and Games, and both will drive public transport requirements.

Once operational, the journey times are going to be reduced for those commuting into the city, and Games goers will use these very tunnels to get to and from event precincts right across the South East.