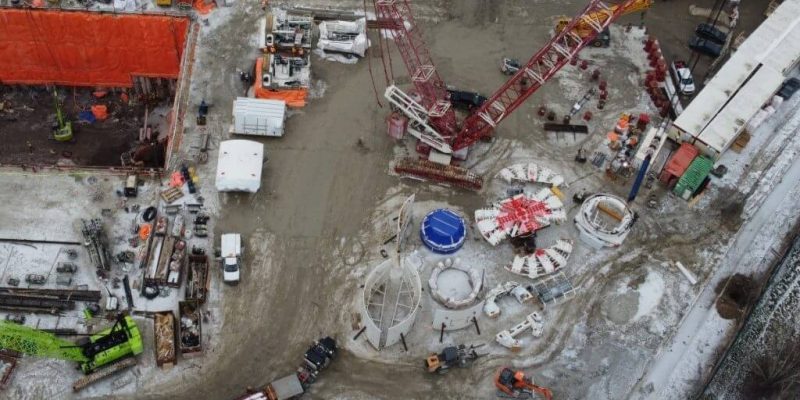 While in the previous month the Scarborough Subway Extension’s tunnel boring machine attained its launch shaft site, three teams have been put on the final list for the scheme’s stations contract.

Naming as Diggy Scardust, the elements of the Scarborough Subway Extension tunnel boring machine (TBM) have arrived at the project’s launch shaft site at Sheppard Avenue and McCowan Road in Toronto, Canada.

The separation process of the machine currently has commenced and will continue over the next few months.

With over than 2,000t weight, the intended machine was custom built at Herrenknecht’s factory in Schwanau, Germany, and the next step was carrying it on a cargo ship in Westdorpe in the Netherlands, which in late November 2021 departed Dutch shores to make the journey across the Atlantic Ocean.

The time of TBM’s reaching to the Port of Oshawa was in December. In addition, two TBMs – named Rexy and Renny – arrived at the port of Hamilton for the Eglinton Crosstown West Extension.

In order to construct the massive excavation required to lower the assembled machine into the ground to begin the actual tunneling process, work has been underway at the Scarborough Subway Extension launch shaft site since last summer.

In the last days of the current year, the TBM is due to be launched to excavate a 7.8km long tunnel with a 10.7m diameter.

In May 2021, the tunneling contract for the scheme to Strabag has been granted by Metrolinx and Infrastructure Ontario.

In addition, earlier this month, Metrolinx and Infrastructure Ontario issued a request for proposals to the three teams shortlisted to bid for the Scarborough Subway Extension stations, rail and systems contract. This covers the building of three new stations, as well as all the other work that will be required to get the subway extension up and running.

The indicated three teams are:
Dragados

Determined deadline for these groups in order to submitting their plans for evaluation is until the summer.

With collaboration of Metrolinx and Infrastructure Ontario for delivering the Scarborough Subway Extension, the expected date is 2029-30.

Comprising of the Ontario Line, the Yonge North Subway Extension and the Eglinton Crosstown West Extension, this project is a key part of Ontario’s subway expansion program with C$28.5bn (£16.4bn) value.