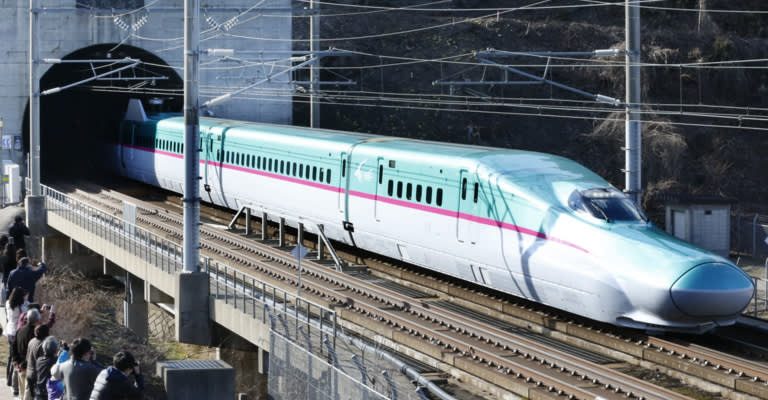 The project will permit car travel between Honshu and Hokkaido.

A new planned undersea tunnel between the Honshu and Hokkaido islands of Japan will have two decks, one for cars and the other for freight trains.

After years of being considered a needless long shot, the notion of a tunnel for auto traffic between Japan’s main island of Honshu and Hokkaido to the north has acquired new momentum.

According to a plan submitted last month to Transport Minister Kazuyoshi Akaba, the 31-km undersea tunnel will

cost 720 billion yen ($6.97 billion) and act as a counterpart to the current, rail-only Seikan Tunnel.

The major undertaking will test the technical capacity of the nation that created one of the longest and deepest tunnels in the world, the Seikan Tunnel. It will face the same budget restrictions and labor shortages which in recent years have hindered other major Japanese infrastructure projects.

Yet supporters argue that as a way of lowering shipping costs and improving the flow of people and goods, the scheme makes economic sense.

“This is a well-conceived proposal,” said Yoshiharu Ishii, a visiting professor at the Public Policy Department of Hokkaido University.

Hokkaido is the only major island in Japan which is not linked by a bridge to Honshu. Cars and trucks are not allowed to travel through the Seikan Tunnel, which has been only designated for bullet and freight trains.

The idea of a second tunnel under the Tsugaru Strait emerged in the middle of the last decade. It evolved into a plan for a two-deck construction, with the top level for self-driving vehicles and the bottom level for freight trains. Vehicles not equipped for autonomous driving would ride on flatbed trucks.

In the middle of the last decade, the concept of a second tunnel under the Strait of Tsugaru arose. It has developed into a two-deck building scheme, with the higher level for self-driving vehicles and the lowest level for freight trains. On flatbed trucks, only vehicles not fitted for autonomous driving can drive.

Sapporo, the capital of Hokkaido, is about 1,150 km from Tokyo—approximately the same as the distance between Tokyo and Fukuoka, a southwestern Japanese city. Yet, according to a report by the Hokkaido Economic Federation, truck shipments cost 34 percent more on the northern road, at 210,500 yen per 10 tons.

It will take about 15 years to construct the recommended tunnel, from initial surveys to completion. The Japan Project-Industry Committee, which comprises the nation’s leading manufacturers and steelmakers, predicts that the cost of construction will be recovered in 32 years, considering a 1.16 percent interest rate on project borrowing.

The estimated tolls are 18,000 yen for big vehicles and 9,000 yen for motorcycles, or about $175. According to the plan, considering regular traffic of 3,600 vehicles and 1,650 vehicles, the tunnel project will be economically feasible.

In 1988, the Seikan Tunnel opened and took 27 years to build. The Toya Maru ferry tragedy of 1954 gained an impetus for proposals for the rail passage under the Tsugaru Strait, famous in song for its cold winters. The ferry sank in Japanese history when it crossed the strait in a typhoon in a sea collision.

According to the Japan Railway Construction, Transport and Technology Department, tunnel construction has overcome various obstacles, including significant floods.

Since then, tunnel-boring technology has come a long way. The plan makes the second tunnel shorter than the present one’s 53.85 km by tweaking the grade, width and other parameters.

For the Hokkaido Shinkansen, a bullet train line connecting Tokyo and the Northern Island, a second freight tunnel will ease the bottleneck. During the crossing, which they share with Japan Freight Railways, high-speed trains must now slow down.

The Seikan Tunnel also requires improvements to the 20 tons of

water that leaks every minute, stakeholders in the building industry claim.

“If there were a bypass available, the construction could be done with less

The 720 billion yen price tag of the so-called Tsugaru Strait Tunnel Project plan does not provide tunnel entrances or connections to current highways and rail lines. The overall cost of making those components is over 1 trillion yen.

The scale and complexity of the tunnel project will equal that of the current building of the Tokyo-Nagoya magnetic levitation railroad. A disagreement with a local council about the impact on aquifers has delayed the initiative.

It would rely in part on the status of the Japan Rail firms, who have shown little support for the project, if the tunnel proposal is able to persuade a hesitant government in Tokyo.