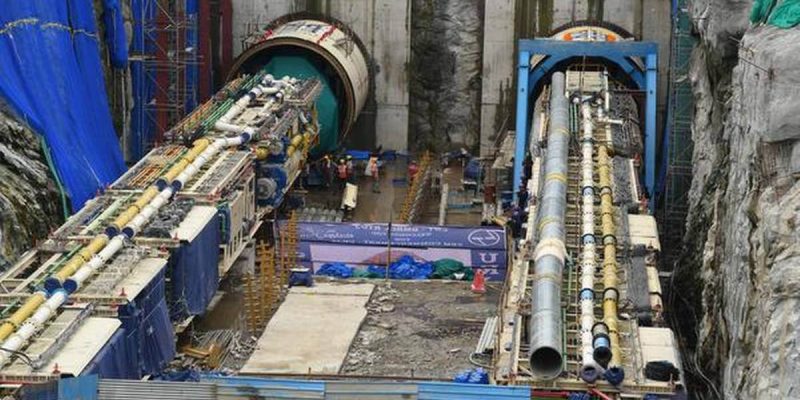 Following completion of the northbound tunnel with 855m length from Cantonment to Shivajinagar stations, on 22 September 2021 TBM Urja, that is the first TBM for the Namma Metro’s Reach 6 line, made a breakthrough at Shivajinagar.

The intended expansion is a segment of the 13.9 km underground section (Dairy Circle-Nagawara) of the Reach 6 line, which has been separated into four packages by the Bangalore Metro Rail Corporation Limited (BMRCL).

In July 2020, the drive of TBM Urja, with the value of almost ₹70 crores imported from China, commenced at the Cantonment metro station site. Although excavating a tunnel beneath one of the oldest settlements of Bengaluru by this TBM lasted more than a year, it is the first of the nine TBMs selected for the underground section of the Pink Line, that achieve progress.

The harsh geological conditions of the path caused many challenges for this machine, such as facing the hard rock and loose soil. In addition, the overburden (the distance between the tunnel and the surface) ranged from nine to 11 m.

The disassembly process of Urja is due to be done by L&T, which has signed the contract for Package 3 (Shivajinagar to Pottery Town Shadi Mahal). The launching shaft at the north end of the Cantonment station will be the carried location of separated sections by road, which will be assembled there to start boring northward, towards Pottery Town station.

While the Urja’s sister TBM, Vindhya, is implementing on the parallel southbound tunnel and has currently dug a distance of 693m, it is estimated to appear at Shivajinagar in 20 days completing both tunnels of the 855 section.

Yet another TBM, named Avni, is expected to make a breakthrough at Rashitriya Military School (MG Road) after completing tunneling a stretch of 800 m from Shivajinagar. Completing Phase 2 will provide an additional 56 km metro line.

The plea of government from BMRCL based on advancing the deadline for completion of phase II of the metro project from 2025 to 2024 is presented, whereas the Union government by increasing the fiscal support, has shown interest in the project to connect the airport. The determined date for granting the contract for the airport metro line from K.R. Puram to KIA would be October-end.

Remoting the Materials to Tunnel Shaft Project by Helicopter