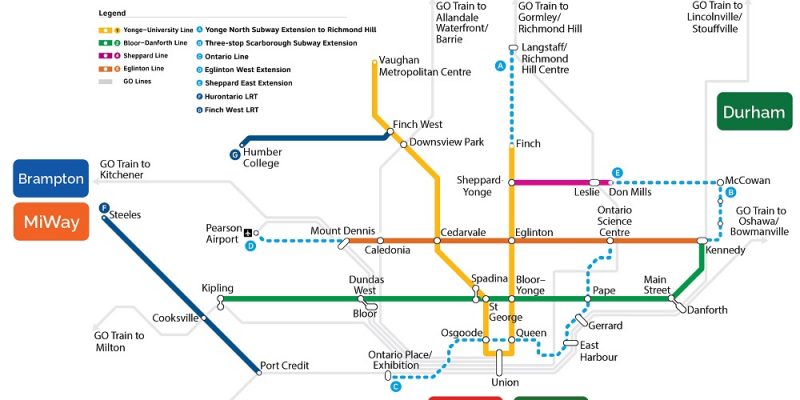 On June 2 it has been announced by Caroline Mulroney, Minister of Transportation, and Kinga Surma, Associate Minister of Transportation (GTA) that the Ontario government is carrying on the next step in building the Ontario Line, the signature project in the greatest subway expansion in the history of the province. The first two public-private partnership (P3) Requests for Qualifications (RFQs) has been issued by the government to qualify and identify the ones who are going to design, build, and maintain the subway line. Three separate P3 contracts has been considered for building the Ontario Line.

Minister Mulroney stated that “Under the leadership of Premier Ford, our government is taking historic steps to expand subway service and reduce traffic congestion across the GTA,” He also added “By issuing these first RFQs we are one step closer to realizing our transit vision and helping to generate economic activity and create tens of thousands of jobs as the province recovers from COVID-19.”

The length of the Ontario Line is 15.5 Km which will be extended from Exhibition (Ontario) Place to the Ontario Science Center. Currently they have planned to build 15 potential stations, including 17 new multi-modal connections to GO Transit, the Eglinton Crosstown Light Rail Transit line, the existing TTC subway stations and streetcar lines.

Kinga Surma, the Associate Minister of Transportation (GTA) claimed that “Investments in infrastructure projects, like the Ontario Line, will be essential for getting people back to work and improving the quality of life for people throughout the GTA,”. Moreover, he mentioned that “To build projects of this magnitude, however, we need everyone at the table. We are calling on the federal government to commit to paying their fair share, at least 40 per cent of the four nationally-significant subway projects.”

The Companies who are interested in bidding on these contracts should register at www.merx.com to download the respective RFQs. Metrolinx and Infrastructure Ontario will evaluate RFQ submissions and then will invite the shortlist teams to respond to a Request for Proposals in autumn 2020.

Laurie Scott, the Minister of Infrastructure asserted that “The Ontario Line is one of the most significant transit infrastructure projects for Ontario in a generation,” Scott added “Moving forward with these procurement contracts signals the government remains committed to building much needed transit infrastructure to reduce congestion and contribute to the economic recovery and renewal of our province.”

The province announced its new transportation vision in April 2019. They have estimated a preliminary cost of $28.5 billion for the project, this includes four priority transit projects: the all-new Ontario Line; a three-stop Scarborough Subway Extension; the Yonge North Subway Extension; and the Eglinton Crosstown West Extension.

Moreover, it was recently reported that York Regional Council and the Province of Ontario reached an agreement to build the $5.6 billion (CAN) Yonge North Subway Extension, however financing has yet to be secured. The Yonge North project would extend the existing Yonge line 7.4 km from Finch Station to the Richmond Hill/Langstaff Gateway Urban Growth Center at Highway 7.

Instant Points:
• In addition to the mentioned three P3 contracts, some segments of the Ontario Line (where the alignment joins GO Transit rail corridors) will be procured separately. It is expected that the work on these sections start before construction commences on the three major work packages.

• TTC will be in charge of day to day operations, including in respect of labor relations. The project company could be responsible for restoring power, re-establishing Ontario Line operations, coordinating with utility companies or others depending on the source of failure to restore operations.

Minister Mulroney introduced the Building Transit Faster Act on February 18, if passed, would supply the province with the tools to accelerate the planning, design and construction process of the four mentioned priority transit projects.