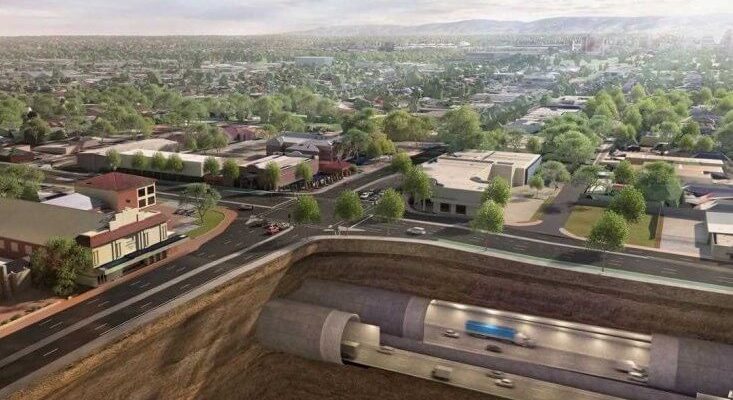 The ultimate section of the North-South Corridor road infrastructure scheme in Adelaide, South Australia, which includes a 10.5km tunnel from Torrens to Darlington (T2D) project, is currently undergoing with serious enabling works, that’s value is more than A$85M (£45M).

The commenced work at the southern end of the project corridor comprises of the relocation of SA Power Networks (SAPN) cabling assisting to clear the way for T2D’s Southern Tunnels launch site and staging area, as well as the relocation of Optus telecommunications services.

In order to assemble and start up the two tunnel-boring machines that are due to excavate 4km of tunnels for a new 6km stretch of the motorway as part of the wider scheme, construction of a purpose-built site near Tonsley Boulevard in Clovelly Park has been revealed in June.

South Australia’s minister for infrastructure and transport, Corey Wingard, said: “Getting this work done early will ensure the Torrens to Darlington main construction, especially the first stage of tunneling, can start as scheduled in 2023.”

“We know these utility services need to be relocated to make way for the tunnels, so we’re cracking on with that task now while we continue to finalize the reference design for the project. These works, which are part of a broader package of enabling works worth more than A$85M, are supporting 157 jobs and creating employment for more South Australians during the early phases of this important project,” added Wingard.

While the bulk of the current SAPN relocation works are going to be done in the streets of Clovelly Park immediately west of South Road, end of the September is the determined date for Optus to installing telecommunication pits and disconnecting and connecting cables.

Following the completion of T2D, South Australian motorists will have access to a 78km non-stop motorway between Gawler and Old Noarlunga.

According to Paul Fletcher, Federal minister for communications, urban infrastructure, cities, and the arts: “The Morrison Government has invested billions in the North-South Corridor – the most significant infrastructure project ever undertaken in the state – as part of its record $110bn [£58bn] infrastructure investment pipeline, which is helping to drive the nation’s world-leading economic recovery.”

He continued: “When finished, this project will bypass 21 sets of traffic lights between the River Torrens and Darlington, with the journey taking on average 8 minutes, saving motorists up to 24 minutes in travel time.”

Although late 2023 is the estimated date for starting main of the construction process of the Southern Tunnels (it is pending relevant approvals), 2030 is the expected time for completing the whole 10.5km project and T2D’s final phase of ground investigations commenced in April and is scheduled to finish by the end of this year.