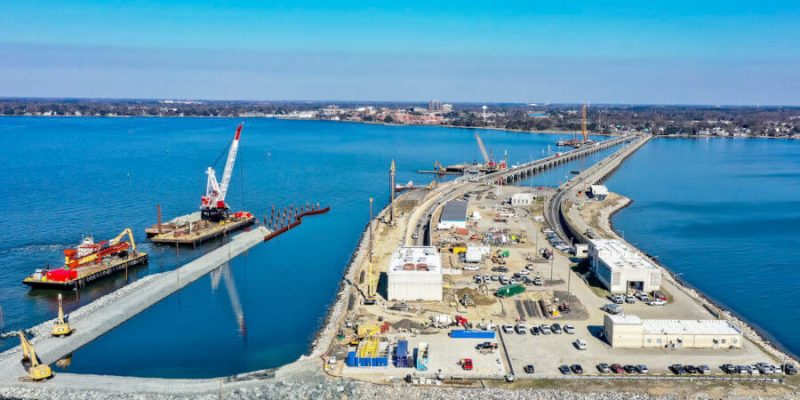 Many breakthroughs in HRBT Expansion Project have been achieved in August. Completion of the underground concrete walls on the South Island for starting up the pit construction, which is also known as slurry walls, where the TBM commence digging the new tunnels, is one of these advancements.

Drilling this pit, which is due to begin this fall, will provide a space for assembly and launching of the TBM. The machine is going to be received later this year via the TBM Quay – a dock that is currently being built adjacent to the South Island, as shown in the image below.

In order to commence the tunneling process next year, the installation of cementitious ground improvement to strengthen the soft soils along the TBM’s path at the South Island is undergoing by crews, which comprises of two apart operations called jet grouting and deep soil mixing.

Installation of the first concrete pile cap, which is armed by special corrosion-resistant reinforcement, was done on the foundation pilings for the new trestle bridges across the harbor in August.

The prime layer of sand fill for the island expansion, has almost been completed by the crew on the North Island. Due to the intention of the crew for sectional destruction of the Mallory Street Bridge over I-64, roadway and bridge construction continues throughout the 16 km (10-mile) corridor.

The Factory Acceptance Testing (FAT) of Slurry Treatment Plant (named “STP Katherine”) is completed at the MS factory in Clermont-Ferrand, France, with the attendance of the members of the HRCP team, as well as Dragados and Vinci. The STP involves a four-story structure with six towers, a building with nine filter presses, and nine large circular tanks. The required bentonite slurry for TBM Mary during her tunneling operation will be generated in the STP facility. Moreover, the “used” bentonite slurry including spoils from the TBM digging will be processed in this facility. The STP Katherine is due to be separated and carried to the project site over future weeks, then she will be assembled in the northwest corner of the South Island and ready for use when TBM Mary starts excavating the first of two new tunnels early next year.