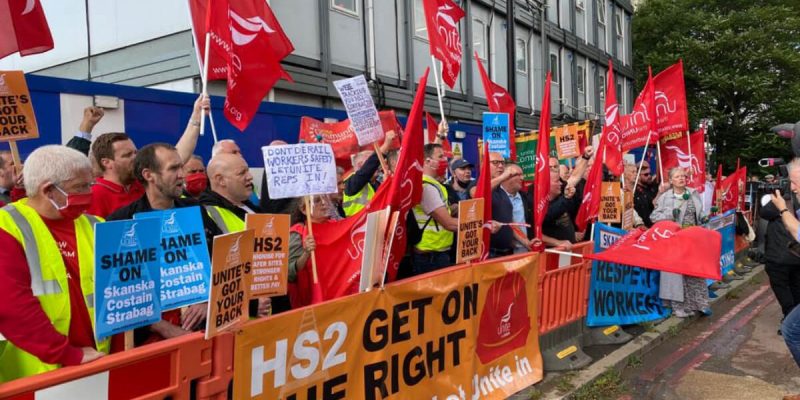 Union Unite is raising safety concerns after it argues a spate of critical accidents have hit the HS2 section being delivered by the SCS JV (Skanska/Costain/ Strabag) in London.

The union has been engaged in a long-running dispute with the contractors over worker representation on the job where it stated Unite officials are not allowed “to freely speak to workers during their breaks in its welfare facilities.”

The alleged accidents which occurred recently, comprise a lorry overturning into a ditch, a worker suffering arm injuries after clay fell from a height onto them, a hammer breaking a worker’s wrist, a skill saw blade came off its mooring and a digger bucket hitting a worker’s foot.

“Workers operating on the Costain/Skanska/Strabag joint venture, will be rightly worried and concerned for their safety,” stated Jerry Swain, Unite national’s officer for construction.

He added: “This project is crying out for union safety reps who play a unique role in protecting workers and preventing accidents.”

An HS2 Ltd spokesperson mentioned: “The safety of our workforce and the public is HS2’s number one priority. We have an open and transparent reporting culture, and all health and safety incidents are fully investigated, key learnings and actions for HS2 and our contractors identified, and these are then shared across the project.

“All those who work on HS2 have the right to go home unharmed, and we continue to work with and challenge our contractors to provide the highest levels of health and safety standards.”

“The health and safety of our teams and the public is always SCS’s first priority and we have offered Unite access to our sites, which exceeds levels usually seen across the industry,” said an SCS JV spokesperson.

He continued: “This enables them to meet our team at inductions, worksites, and our welfare area. We first offered this to Unite in 2018 and on numerous occasions since.

“We continue to make contact with them to reiterate this offer as we seek to maintain an open dialogue with Unite and to allow them to carry out their activities. To date they have not taken up this offer, however, it remains open to them,” added the spokesperson.