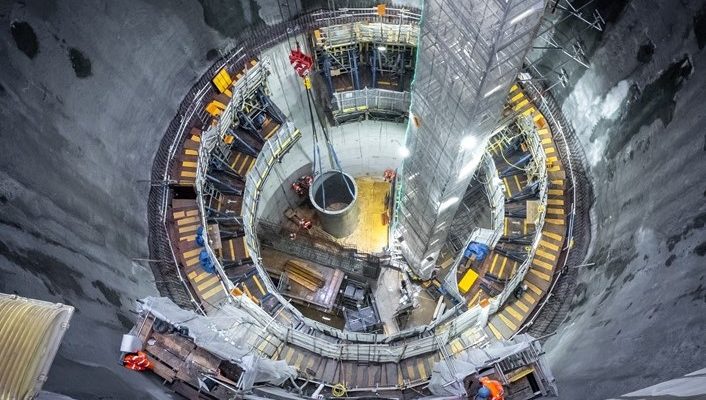 Another milestone i.e., the secondary lining completion of the 49m-deep shaft at Albert Embankment, has been achieved by the London’s so-called ‘super sewer’, Tideway.

In works which have started in the fourth quarter of 2020, nearly 1,800m3 of concrete and 400t of steel reinforcement were needed to produce the 14 ascending shutter lifts. Meanwhile, crews also operated on the shaft’s internal structures. Now, the team is going to carry on finishing the heading beam at the top of the shaft and start building the wall which will shape the perimeter of new public space to be made on the riverside.

Two new areas of public realm expanding into the foreshore will be made once construction is done, enabling people to get close up to the river. In addition, they will be able to follow the Thames Path which is also being reinstated.

One of the three giant structures that is going to link London’s ageing Victorian sewer system to the new deep-level super sewer is the Albert Embankment shaft. The other two shafts are at Victoria Embankment (48m) and Heathwall Pumping Station (28m deep). The thickness of base slabs for the shafts are up to 3m and were made by constant concrete pours to guarantee compatible quality.

Totally, Tideway will have 23 shafts designed to intercept and convey sewage flows down into the new tunnel which has different diameters and will run mainly under the River Thames at depths of 30-70m. Conveying sewage eastwards under gravity, the 25km-long tunnel is designed to intercept the roughly 39 million tonnes of raw sewage overflows estimated to enter the river every year. A total number of six TBMs have been excavating the tunnel, the largest of which has a diameter of 8.8m.

Brenner Base Tunnel: Breakthrough of first main tunnel below the Isarco river