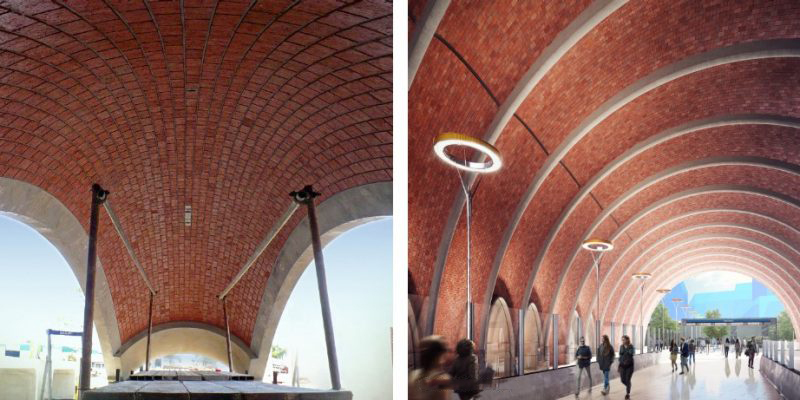 Alice TBM, that was the third TBM to end work on the Melbourne Metro’s twin tunnels, started excavating at Town Hall Station after successfully digging beneath the Yarra on the May’s first week-end. The only TBM which has not completed the final leg of the 9km tunnels from Kensington to South Yarra is TBM Meg and it is going to finish its tunnelling process in the future weeks. Focus now turns to construction of the five new underground stations.

Arden Station will be the heart of a huge new precinct that will be the home of Victoria’s innovation economy. The construction of the stations, that will consist of the installation of pre-cast platform units with further concrete pours, has been commenced.

The station’s internal walls are in place, construction on the roof slab is near completion and crews have begun to install mechanical, electrical and plumbing services in the station box. Almost 38 piles deep into the ground surrounding the eastern end of the station, have been sat up by workers in the first days of this year, to reinforce the entrance building’s foundations.

Arden Station’s portal will include 15 soaring brick arches, which are being built off-site with more than 100,000 bricks laid by hand onto precast concrete, to be delivered on site over the next few months.

Due to the valuable industrial history and identity of Melbourne’s inner north the massive arches is going to spanned the entrance. They will be made up of 52 concrete segments, each weighing 45-50 t and lined with 104,000 bricks. Producing the intended bricks in Victoria, then transporting them to a concrete manufacturer in South Australia and finally laying them into the precast concrete segments by hand, are the steps of this process.

It is expected that in 2029 Arden Station will have a straight connection to the Airport and stand within walking distance of the North Melbourne Recreation Centre, Arden Street Oval and the route 57 tram, creating a transport hub.

While the estimated time for completion of the Metro Tunnel Project is by 2025, this project will make capacity for more than half a million additional passengers per a week during congestion times across Melbourne’s train network.