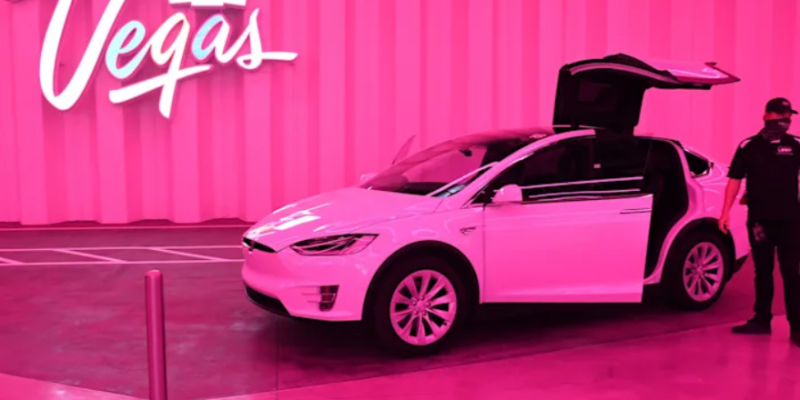 Tesla which is launched by billionaire entrepreneur Elon Musk, and is behind a great underground construction project in LA, gave a first look at what is being described as a “people-mover system” near the city’s iconic strip.

It was anticipated to cut the 15-minute walk along the LA Boulevard resort corridor into a two-minute journey, propelled by Tesla vehicles capable of carrying as many as 16 people.

However, at the moment the Vegas loop features only Tesla Model X and Model 3 vehicles rather than the larger ones such as 16-person cars, with president and CEO of the Las Vegas Convention and Visitors Authority Steve Hill telling the Las Vegas Review-Journal: “It seems that during a pandemic is not the time to be increasing capacity.”

The approx. 1.5-mile tunnel which is 40 feet underground, links to two stations that are on the ground, as Tesla’s self-driving vehicles carry passengers at speeds of 35 mph. The firm mentioned it would at first employ its own drivers to also operate the vehicles during trips in the event of emergencies.

Many questions remain regarding the new project, such as how passengers will be able to load and unload from the vehicles and what those 16-passenger vehicles may look like.

One of the reporters of the Las Vegas Review-Journal, James Schaeffer, described his experience within the tunnel-way and believes that many details remained unclear.

“Now, we’ve gotten to see a lot on this tour. Heck, I’m in a Tesla right now going through it.”

He added: “But there are some details that we are not so sure of … that we’re still finding out more about, like the loading and waiting procedure times and about the 16-passenger vehicles that will be coming through these tunnels.”

He continued: “Until then, we’ll just be going along for the ride like everyone else.”